What is “discipleship”? | Wycliffe College
Skip to main content 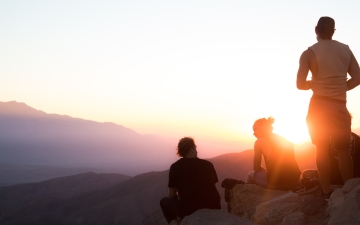 A friend told me she once preached about discipleship. After the service, a parishioner came up to her and said, irately, “I am not a disciple. I am a member.” Oh well, I guess it was better than no reaction at all, and certainly better than, “Lovely sermon.”

Like mission and missional, disciple and discipleship can be irritating words. Does anyone understand them? And do we really need them? It is no coincidence that all these words achieved prominence, even notoriety, around the same time—perhaps ten years ago. As we used to say, they seem to “go together like a horse and carriage.”

In a previous post, I suggested that the best way to think of “mission” is to say that it is the love of God at work in the world to put to rights everything that we have put wrong. And, as Christians understand it, that love has a unique focus in the life, death and resurrection of Jesus. So far, so good.

Here comes the connection to discipleship.

When Jesus came announcing the mission of God—he called it “the Kingdom”—the next thing he did was call the first four disciples (Mark 1). Is that just coincidence? I have checked half-a-dozen Bible commentaries, and not one of them makes anything of the fact that the two things go together, so I could be wrong.

But think for a moment: what exactly is a disciple? I used to say, “A disciple is a student,” which would make a Christian a student of Jesus. It’s not a bad start. That gets us away from the idea that a disciple is something weird and religious. But then I realised that, for most of us, when we think of students, we think of people taking notes from or listening to a teacher at the front—not a picture you often find in the Gospels!

Then I got a brainwave. I have no idea where it came from, though Dallas Willard often uses this image. What if, instead of talking about disciples, or even students, we talked about apprentices?

I was once preaching about discipleship at my home church, St John the Evangelist, and decided to try this idea out. I invited my friend Ken to come up from the congregation so that I could interview him. Ken is an electrician. It was a short interview, since the interview really only had one question: “So, Ken, how did you learn to be an electrician?” The answer was, “Well, on Mondays, we went to class and had lectures about electronics. Then, from Tuesday to Friday, we were out on the job with a master electrician, and learned in a hands-on kind of way how to be electricians.” In other words, he had an apprenticeship.

Isn’t that the way it was with the disciples?

Certainly there were a few lectures. (Think Sermon on the Mount and Sermon on the Plain.) But most of the time, they were watching the master craftsman at work, and slowly being given responsibilities to do some of his work themselves. When the disciples expect Jesus to do something about a hungry crowd, he responds, “You give them something to eat!” Isn’t that one of the keys to apprenticeship?

So here’s the question. It’s clear what it was that Ken was being apprenticed in. The end of the apprenticeship was someone who was (and is) a competent professional electrician. But what is the end of an apprenticeship with Jesus?

This is where it’s helpful to connect the call of the disciples with what happened immediately prior to that call: the announcement of the Good News. Think of it this way: Jesus announces, The Kingdom is here—the culmination of God’s work to restore all things. And then he calls people to be his apprentices. It’s obvious, isn’t it? They are being apprenticed in the work of the Kingdom. Nothing more, nothing less.

You will sometimes hear people say, “Mission is finding out what God is doing and joining in.” It’s not a bad definition, and it relates neatly to this idea of apprenticeship. The “mission of God” is precisely that: in the first place mission is something God is doing. The business of God is to heal the sick, mend the broken, heal the hurting, comfort the afflicted, forgive the sinful, reconcile the alienated, include the excluded. This has always been God’s purpose in the world—if God is love, how could it be otherwise?—it is God’s purpose now, and it will always be God’s purpose until that work is complete. Right now, this is the work that God is doing, inside and outside the church.

So what does an apprentice do?

We observe our Teacher and Trainer, and try to apply the lessons we learn. What are the places in our families, our places of work, our places of leisure, where there is need for compassion, for generosity, for reconciliation, for community? That is probably where God is inviting our partnership and our learning.

What might this look like? There are as many answers as there are situations of human need. That’s why discernment comes first. “Mission is finding out what God is doing and joining in.”

One more thing: Ken’s apprenticeship took several years. Most days it took the whole working day, from nine till five. Jesus’ apprenticeship program is different. It lasts twenty-four hours a day, seven days a week, 365 days a year (and 366 in leap years). Is that hard? Of course. He never said it would be easy.

But is it worthwhile? As we are apprenticed, we ourselves are changed into the people God always dreamed we could become, and we contribute our small bit to the mosaic that is the Kingdom—and that brings joy. Frankly, is anything else worthwhile?

John Bowen is Professor Emeritus of Evangelism at Wycliffe College in Toronto. The themes in this article are explored more fully in his latest book, The Unfolding Gospel: How the Good News Makes Sense of Discipleship, Church, Mission, and Everything Else (Fortress 2021). A version of this article was previously published in the Niagara Anglican Newspaper.