When past and present come together 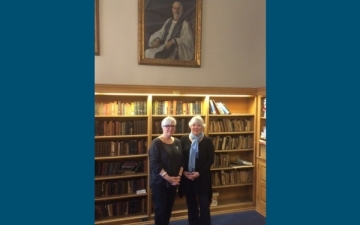 Jane Hodgins (left) and Judy Anderson (right) stand beneath the portrait of their great-grandfather, Dyson Hague, in the Cody Library at Wycliffe College.

It’s not every day that one has the opportunity to hear history brought to life, or to see the past and the present come together in a deeply meaningful way. But I did.

It started with a remark left on a Wycliffe College social media post. The post showed up in Judy Anderson’s Facebook newsfeed, prompting the Toronto elementary school teacher to comment. That note led to another, and then another, during which I learned that Judy’s great-grandfather had once taught here at Wycliffe.

So began a conversation about the Rev. Dyson Hague, Canadian evangelical Anglican rector, author, lecturer and Wycliffe College graduate (Class of 1882). At one point, Judy shared a photo of her great-grandfather, and mentioned that his portrait had once hung in a place of prominence in the College. A quick check, and I was able verify that it still does. (Hague had a long tenure here at Wycliffe College; his image shows up in graduating class photos from 1907 to 1937.)

The Rev. Hague’s portrait, painted in oil and surrounded by an elegant gold frame, hangs in the Henry John Cody Library.

He looks down from above, as if keeping careful watch over shelf upon shelf of antique books. Calm and dignified in academic robes, his handsome bearded face displays an ever-so-slightly furrowed brow, as if the grey-haired scholar was feeling mildly impatient with the need to pose. But his is a kind and intelligent face, and I told Judy so, inviting her to come and see it for herself.

That is how it happened that one week ago, Judy Anderson and her identical twin sister Jane Hodgins came to visit Wycliffe College. They are a dynamic duo, brimming with energy and enthusiasm, and with stories of their ancestor (who lived from 1867 to 1935) and of his still felt impact on their lives.

“We both feel very close to Dyson, and we feel his presence,” said Judy. “He is a living witness, though we never knew him.”

“We saw his picture during frequent visits to our paternal grandparents’ home,” added Jane, “so he’s always been a presence in our lives.”

The family stories handed down from generation to generation to Judy and Jane convince them that, much like themselves, “He was larger than life. … Blunt, loud, forthright, didn’t hold back,” explained Judy. “He was an evangelical,” added Jane, picking up where her sister left off. “If the Salvation Army was on the corner, we’re told he would say ‘I’d like to talk,’ and then would start to preach. He wasn’t ashamed of his faith.”

“And neither are we,” she added with a smile, and a twinkle in her eye. “And we get in trouble for it.”

Today both women are devout Catholics (Jane is married to an Ordinariate priest), and they credit Dyson with leaving a legacy of faith. “We’re sort of the tip of the Dyson Hague iceberg,” explains Judy, “and Wycliffe College is integral to that!”