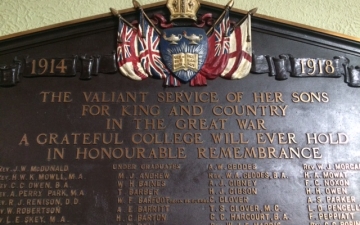 People today know less about history than previous generations did, writes Wycliffe College's Adjunct Professor of Church History and Theological Librarian, Thomas Power, and that is to our detriment. As we prepare to mark the one-hundredth anniversary of World War I, Dr. Power's blog - in which he argues that ignoring the past can have terrible repercussions -  is worthy of our reflection. (Note: the photo illustrating this post is of a plaque that hangs in Wycliffe's Sheraton Hall, commemorating graduates of the College who served in Canada and overseas during the Great War.)

Christianity has had a central role in world history for the past two thousand years. Yet people today know less about history than previous generations did. Tradition is seen as constraining, as an embarrassment in a politically correct era, and as something to be broken free from. The result is a disconnect between past and present. In consequence, ignorance of the past has led to mistakes and misunderstandings in the present, often with violent consequences.

Yet there are moments of public engagement and this month and year, November 2018, is a special one given that it marks one hundred years since the ending of World War I (1914-1918). Remembrance Day, this year, is an opportunity for us to reflect on the past. As well as remembering the toll of human life in that conflict, it is an occasion to ask: “Where was God in the midst of the tragedy of war?” and “How are we to understand such events in the light of God’s plan of salvation for the world?” To answer such questions, we need to understand the Christian view of history.

Christianity is a historical religion and a sense of the past is at the core of Christian faith, one that is always contextual in its expression. Historical events form the very fabric of the Christian faith. Its key text, the Scriptures, is essentially a primary historical record, in which God’s dealings with his people are set out. For believers in Jesus Christ, the key event of the incarnation means that at a particular moment in time and place God entered history. God’s creation began time; the coming of Jesus is its mid-point, and his return will bring time to an end. As expressed by David Bebbington the sequence is: God intervenes in the world, God directs the course of history and human affairs in a linear way, and God will bring it to a conclusion which he already knows. In this way, because God is sovereign, he is involved in history, guiding it, and bringing it to a planned conclusion. Over the centuries Christians felt confident regarding the future because of their belief that the course of history was guaranteed by divine sovereignty. This model provides a frame of reference to discern God’s action in particular moments in time and in the events and occurrences of the past.

By this measure, it might be easy to recognize God’s hand in the lives and work, for instance, of Augustine of Hippo, Francis of Assisi, the evangelical revival of the 18th century, or the sacrificial life of Mother Teresa of Calcutta and many others. They can easily be viewed as prime examples of God’s intervention, mercy, and benevolent action in human affairs. But what are we to make of the wars, suffering, persecution, and the destructive power of evil in the world? It is less easy to see God at work, for example, in the bubonic plague of the 1340s that wiped out up to half the population of Europe, the slaughter of two world wars in the twentieth century, or the ethnic cleansing of Rwanda in the 1990s. Where was God in these tragedies? Are they understandable only as exercises in God’s judgment on humanity?
Christians understand that the pain and suffering of human existence is all part of a divine purpose and that history is a struggle between good and evil. It is important to believe that God can be active in a providential way in human events especially when good emerges from evil. Thus even in trying circumstances, hope is real since history has a goal and God’s ultimate victory is assured. For this reason, while we acknowledge the tragedies of history, we can also claim that God redeems such tragedies. In the end, we can be confident that all of history has deep meaning because it is intrinsically bound up with the purposes of God. Hence it is worthy of our close study.

Thinking of studying Christian history? Dr. Power is teaching the History of Christianity 1 (to AD 843) this January.