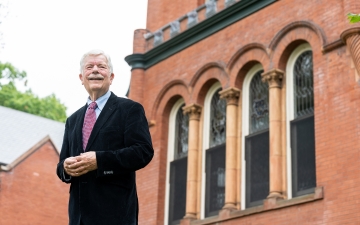 How can studying the past help us in our Christian formation?

It can help us in several ways: it can confront us with the mysteries of God's providence, globalize our understanding of Christian life and faith, explain why our churches do things the way they do, justify the norms that the Church ought to honour, and challenge false or biased constructions of the past that distort our sense of the Gospel, church, and world.

Here I'm going to talk about the last way.

Socrates said that a good philosopher is like a dog: it barks at what it doesn't know. Studying Church history teaches us to bark at claims that people make about the Christian past without really knowing whether they're true. Such claims come up in all kinds of Christian literature and on social media, and they can be embedded in our liturgies, hymns, customary practices, and theological assumptions. And then they can misshape our Christian formation.

For instance, when Anglicans read the editorial prefaces to the services in the Book of Alternative Services, with their ill-supported generalizations about early Christianity and questionable liturgical rationales, they should bark.

The way we relate to the past is important. For one thing, it shapes our identities. If you've known people with dementia, as I have, you know how much they've lost of themselves. They've forgotten their loves and joys. They don't remember who has earned their trust. They can't recall how things work, including themselves.

History is important to nations, communities, schools, and associations too. Our church buildings, for instance, display memorial windows, furnishings, plaques, and nameplates. And when a congregational meeting discusses a proposal for change, you can bet that people will talk a lot about how things have been done in the past.

The problem is, we sometimes misremember or make up or filter out our past, and that can hurt people. False memories can put innocent defendants in jail. Repressed memories can trouble people's mental health. Conflicting memories and forgotten promises can destroy friendships and divide families. Histories that puff up some groups at the expense of other groups can obstruct justice. Healing and reconciliation require truth.

And that's why church historians need to deconstruct false narratives of the past.

When medieval popes thought they had a right to tell empires and kingdoms what they ought to do, that hurt people. The popes appealed to a document purporting to be a grant of authority to themselves from the Emperor Constantine, but in the fourteenth century an Italian historian debunked the document, and western Christianity was the better for it.

When English Christians in the sixteenth century observed meaningless liturgical ceremonies like processing a stag's head to the altar, that kept them from worshipping in spirit and in truth. The reformers demonstrated the looney origins of these traditions.

When Nazi Christians supported the persecution of Jews, they painted a picture of Jewish wickedness based in part on the Protocols of the Elders of Zion. The historians showed that that document was pure fakery. (It hasn't ceased to do harm, unfortunately.)

Papal imperialism, meaningless liturgies, and anti-Semitism have hurt people and subverted the Gospel, and they have been enabled by fake history.

I wrote my doctoral thesis on the English Reformation, when evangelical Christians wanted to clear away false traditions in order to recover the word of God in Scripture.

The historian John Foxe was a giant in that campaign. In 1570 he published a book exploding myths and legends about the history of Christianity in England. Many parish churches placed it next to their lectern Bible so that people could free their minds from errors about Church history and then read the Bible with fresh eyes. Mind you, Foxe's book created quite a number of dangerous myths of its own.

In the 1590s the quintessential Anglican theologian Richard Hooker explained why he embraced the Protestant principle of "Scripture alone." Human traditions were to be rejected, he said, because "they are neither in the Scripture, nor can otherwise sufficiently by any reason be proved to be of God" (E.P. I.14.5). Ironically, poor Hooker is often falsely remembered among Anglicans today as the exponent of the "three-legged stool" of theological authority: Scripture, tradition, and reason. Actually, when Hooker used the word "tradition," it was almost always to derogate it.

Not that "Scripture alone" means a private reading of Scripture. Hooker would want us to approach Scripture in conversation with wiser people than ourselves, including the great Christian writers of the past. (At this point history does indeed have a constructive use.) Hooker also would want us to read Scripture with all our intelligence and common sense, and to discern the testimony of the Spirit.

Innocent traditions do have their place. For instance, they can give us a template for doing things decently and in order. And as Tevye says in "Fiddler on the Roof," they can give us balance. But they have no intrinsic authority. In fact, unlike Scripture, tradition has no commonly agreed content. What counts as tradition is determined differently by every denomination, and by every school of thought within every denomination, according to what it wants to believe.

Paul resolved to know nothing but Christ and him crucified. In order to do that, he had to question, relativize, reinterpret, or repudiate some narratives of the past. If we're to hear the word of God in our time, I believe that we need to do something similar. The Word of God comes to us from a relatively powerless Asian nation, but to us in the west it comes bonded to the memories of European empires. Deconstructing these secondary traditions, and engaging with alternative global inculturations, can refresh our hearing of the Gospel. These are among the skills that I hope my students learn when they study Church history.