Words: The Power of Life and Death | Wycliffe College
Skip to main content

Words: The Power of Life and Death 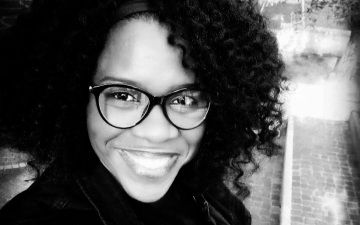 In the wake of anti-Black racism protests around the globe, people have been questioning the public statues and other works of art that surround us for the statements they make, overt or otherwise. In this blog post, Wycliffe student Sileen Phillips responds to news of a call to redesign one of the Queen’s highest honours, saying that the values it communicates are the epitome of evil.

There is a famed idiom that says, “a picture paints a thousand words.”

England’s Dame Commander medal is of a “most high distinction” from the British order of chivalry, which was founded April 28, 1818 by George, Prince Regent, later King George IV. Originally bestowed solely upon those in high positions in the Mediterranean, it recognises service in a foreign country and is worn by Governor Generals in countries all across the Commonwealth, like my country—Jamaica.

The medal depicts Michael the archangel defeating Satan in chains while stepping on his neck. The problem with that? The angel is depicted as a White man and the chained devil as a Black man. A dragon, serpent, some other non-human creature could have been used, or both White men or both Black men. The choice to make the angelic creature a White man and the demonic one a Black man was deliberate.

“How much deeper can a wound get?” I thought when I saw a photograph of this medal recently. “How much clearer can we make the deeply entrenched racism upon which our culture is built, so that people will begin to understand the core of our plight?” Yet, there are some who argue that the image is not offensive, was likely not deliberate and may have even been well intended. I am uncertain if I should be shocked at this response, but this type of argument that justifies racial subjugation makes me feel an indescribable intensity of pain.

It is one form of evil for one race to declare itself supreme to another, but it is an entirely different degree of evil to demonize that other race, equating its members with Satan, while yours is a heavenly being subduing him underfoot. And all in the name of God! This picture doesn't just say a lot, it says everything—and the Church remains silent on this issue. On June 18, 2020, the Church of England and the Bank of England apologized for their role in our enslavement and admitted that the Church is "still deeply institutionally racist." An apology alone cannot fix this damage. It needs to be repaired.

A medal of honour that spews hatred, awarded to the very people against which the hatred is projected—and we should feel privileged to wear it too! All this time this image with such a powerful message has gone unnoticed. Or, perhaps my people are so blinded by the lies that we have been told about ourselves, that we have failed to recognize blatantly racist messages like this that are hidden in plain sight.

This imagery speaks to what lies at the core of the self-loathing that exists among our people and the lies we were taught—Black skin is “ugly,” our hair is “bad,” we ought to pursue interracial marriages or marriages with Blacks of lighter complexion in order to have “pretty” children, etc. This mentality has plagued us for centuries, myself included. While there is an ongoing revolution to raise Black consciousness of our beauty and rightful place as God’s creation, made in God’s image and likeness, such thinking is still very prominent.

If words are so powerful that God used them to speak the entire universe into existence—according to the book of Genesis—imagine what the words spoken through images like this can do to an entire race. The medal bears the Latin words Auspicium Melioris Ævi which means “Token of a Better Age.” But a better age for whom? The foundations of history need to be rattled and re-established upon a foundation that is free of such evil.

Sileen Phillips is a full-time student in the Master of Divinity and Master of Theological Studies program at Wycliffe College. A Child, Youth, and Family minister at the Church of St Peter and St Simon the Apostle in Toronto, she is a literary and visual artist who performs spoken word. She loves Bible study, gospel music and preaching, and helping charities that focus on providing relief efforts and projects to benefit children and young women. Her greatest passion is the Gospel of Jesus Christ, and sharing it with others. In 2012 Sileen was the recipient of the Queen's Diamond Jubilee medal. It depicts no racist images.