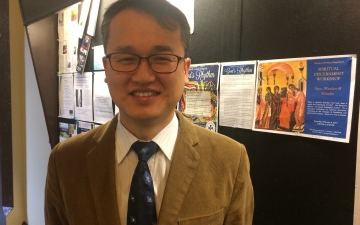 He speaks quietly, and thoughtfully in the manner that scholars do. Apologizing, unnecessarily, for his excellent English – “You know I’m from Korea, and English is not my first language,” – Manhee Yoon shares the details of what is certain to be a remarkable adventure.

Later today, February 1, 2017, at around dinner time, he will board a plane that will take him from Toronto to Belgium, where he will wait for another flight to Senegal. The final leg of his journey will take him to The Gambia, or more precisely, the Republic of The Gambia, a country officially declared an Islamic Republic a little over a year ago. Once there, he will take up residence in the town of Serrekunda, just outside the tiny country’s capital city of Banjul, and begin to teach at the West African nation’s only university in its undergraduate Christian Studies program.

After just over 24 hours of travel, Yoon will have left behind his wife and children (until June), traversed the globe, and landed not just on another continent, but in another culture.

An Abrahamic kind of story

It is an Abrahamic kind of story; just as God told Abraham to leave his homeland and journey to a new place he knew not of, Yoon believes God has called him to work in – and eventually transplant his family to – a country he has never even visited.

He is a Christian, a husband and father, an Old Testament scholar with a newly-minted PhD (earned over the span of nine years at Wycliffe College and awarded in November, 2016). And as he tells his story he displays the kind of courage and confidence that comes from absolute trust in a Master who has proved faithful. Indeed, he credits his studies at Wycliffe with teaching him “to trust in God, to learn more endurance and patience.”

“When I first heard about this opportunity [to serve in the Gambia] I thought it was remarkable,” he says. “We are free to teach the Bible in a national university, in an Islamic country. And the program is only two years old. It was started in 2015 after many years of active effort on the part of [Wycliffe’s] Glen Taylor and CVM (Christian Volunteer Movement).”

Yoon speaks of Glen and Marion Taylor as literal answers to prayer. “The thing that I enjoyed most about Wycliffe was the professors. When I was thinking about coming to Toronto, one of my prayer requests was to find a mentor who could guide me. The Taylors have been the answer to my prayer.”

Perhaps it is because he is on the threshold of such a significant life change, but Yoon’s eyes glisten with emotion as he reflects. “When I couldn’t find a way through my studies, Glen would come to me and tell me he would pray. Marion has been like a mother. She challenged me and comforted me with her kind words. She would give me a push when I needed it.”

“Without them, I know I couldn’t have made it to the end of my studies. That was the biggest blessing I received here.”

Originally due to leave for The Gambia on January 11, his trip had to be delayed due to political unrest there. He is thankful that the situation resolved peacefully.

Yoon’s wife, Hyun Jung Lee, and their two children (Esther, 13 and Micah, 10) support him. They recognize that for Yoon, teaching on the other side of the globe is more than a career move, it is a calling. And so, while his new position means they will have to uproot their lives in Canada’s largest city this summer, and establish themselves in a very different part of the world before the new semester begins, they are ready to do so.

But Yoon is not naïve; he knows there will be challenges ahead, for all of them. And so he asks for prayer.

“English is not my first language,” he reminds his listener. “I’ll be teaching these Gambians in English, in a very different society. Pray that I can communicate the Word, the biblical truth to them. Pray that I may enjoy teaching and interacting with the people there. God has given me love for them already, but pray that I will love them more. Pray for my wife and children. Pray for health and safety.”

Give to support Dr. Manhee Yoon’s work at http://www.globalscholarscanada.ca