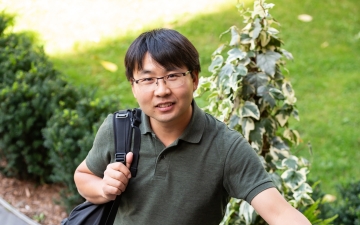 The following story was written prior to the outbreak of the coronavirus pandemic. We recently caught up with Steven, who reports that the ministry it describes has continued via video conference. In fact, he has seen it flourish. New participants have started joining online, some from out of the province, and some from out of the country who hope to learn English with a group of Canadians. During this time of social distancing, while most people need to stay home, communication technologies such as video conferencing have given rise to new connections between people who would not have connected prior to the pandemic due to geographical distances. However, such boundaries are removed when people communicate online. This new development has led Steven and his team into thinking about new ministry possibilities when the pandemic is over.

While the way the group meets is different from how it used to be, the spirit is the same for Steven: to reach out to people from diverse cultural and ethnical backgrounds with the gospel of Jesus Christ.

Every week, Steven Xu (MDiv 2014) and a group of volunteers meet in the basement of a coffee shop in downtown Toronto where people from all walks of life gather for free English lessons. Together they make meals, and prepare and teach the lessons, all with the same hope: to exhibit Christian hospitality, to serve as a bridge to God, and to demonstrate unconditional love.

It has been more than five years since Steven began serving in this outreach ministry, A Quiet Place for Internationals, which he now oversees as an evangelist of Toronto’s Christ the King Anglican Church. The ministry’s aim is to create a safe, friendly, and mutually supportive environment for newcomers and international students where they can make friends and experience multicultural community life. Activities include free English lessons, meals, group hikes, and Bible study. Newcomers hear about the group by word-of-mouth and through the social networking app Meetup.

Meeting close to Queens Park and Chinatown, the ministry hosts a global community where people of different ethnicities, age groups, and religious backgrounds gather. Most of them participate because they hope to learn English and meet friends. Some come with the intention of learning about the Bible. One Iranian Muslim woman expressed interest in learning about the Bible because she found Christians friendly. Participants come from all walks of life – high school students, college and university exchange students, visiting scholars, migrant workers, and refugees – with different goals and needs. Most students hope to meet friends and learn English. Professionals want to network. Refugees have more needs than most, emotionally, materially, and physically.

How the ministry started

The ministry operates at College and Spadina, on what used to be the site of the Broadway Tabernacle, a Methodist church, and once home to one of the largest congregations in Toronto. The church building was demolished in 1930 and a commercial building replaced it. In 2011, the current owner decided to dedicate the building to ministry to internationals. One of the missionaries who attended was a Wycliffe student who invited Steven. Steven says the invitation was an answer to prayer because it coincided with his search for a place to serve God.

Christ the King eventually adopted the ministry, providing financial and spiritual support. Since then, A Quiet Place for Internationals has matured with a stable roster of volunteers and dozens of participants weekly.

How Wycliffe shaped him

Steven says his studies at Wycliffe strengthened his faith and equipped him for ministry. The discernment and confirmation process during his time in seminary was also important – discerning where and how to serve God, even when not seeking to become an ordained pastor. When he started his studies, he had little idea about what he would eventually do, but he had clarity by the time he graduated from Wycliffe; conversations with professors and students helped.

Steven believes his direction is certain: to continue serving in international ministry as a way of doing his part to fulfill the Great Commission.