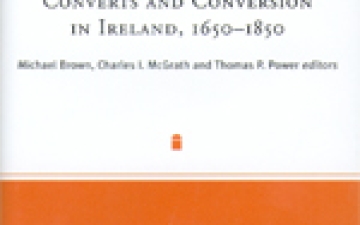 Conversion was a highly controversial aspect of aspect of religious life in Early Modern Ireland, yet it remains under investigated by modern scholarship. This collection brings together both new and established scholars to begin the task of exploring this vexed issue. The book takes a wide chronological span, treats of the broad range of Irish confessional lives and uses a variety of disciplinary approaches, interrogating the variety of individual motivations in the face of religious and political pressures to conform during a controversial period in Irish history.

As well as co-editing the collection and co-authoring an introduction to it, Tom also contributed two essays entitled: “’A weighty, serious business’: the conversion of Catholic clergy to Anglicanism”, and “The theology and liturgy of conversion from Catholicism to Anglicanism”.

‘Written in a clear and eminently readable style, and has much to say to us in our new century.’ Dublin Historical Record.

'The essays present a wide spectrum of motivations, experiences and consequences of conversions …This is certainly a first step to ‘fully explore the disparate religious experience of individuals, families and communities within Ireland.' Lotz, Archiv Fur Reformationsgeschichte 36, 2007.

'This is a book which will make you think again about the question of conversion … The authors and the editors are to be congratulated on a finely written and produced volume of essays which goes a long way to explain a lesser-known area of Irish religious history', Eoin Magennis, The Anglican & Episcopal History Journal, vol. 76, no. 3, Sept. 2007

‘On the whole, this collection of essays represents a very substantial accession to the literature of religious conversion in Ireland. The merits of the essays themselves aside, the sheer volume of source material identified and cited deserves mention; it will be valuable to future researchers in the field of conversion, while the lists appended to several of the essays are especially convenient’, John Bergin, Eighteenth-Century Ireland (Vol. 21, 2006).