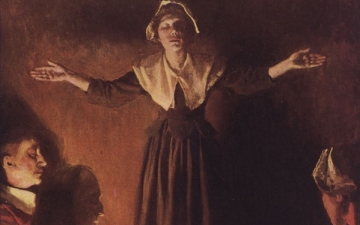 Paul’s words to the Corinthians—that women should keep silent in the churches—have traditionally been understood as prohibiting women from preaching, speaking, and teaching in church. But this interpretation of 1 Corinthians 14:34 has been challenged throughout history by women who struggled to understand how Paul could command women’s silence in Corinth, when both the Old and New Testaments—and even 1 Corinthians itself—provided many examples of women proclaiming God’s word, preaching, teaching, leading, and prophesying.

Unfortunately, women’s published arguments against the silencing of women in church were also silenced and forgotten. Thus, each generation of women since has had to do the hard work of interpreting this and other difficult texts in light of the strong witness of clearer biblical passages.

1.  Domenica Narducci da Paradiso (1473-1533) was born in the suburb of Florence called Paradise. The well-educated Narducci became a renowned preacher and leader in her community. Many of her writings, which were preserved in the convent she founded in Florence, have been recovered. They include letters, sermons, a number of spiritual essays, and more. In 1507, Narducci stood up to those who thought women should not be preaching, by preaching on Paul’s instruction that women should be silent in church (1 Corinthians 14:34).

First she explained that she had had a divine revelation: Paul’s teaching in the first chapter of 1 Corinthians—about God’s foolishness being wiser than human wisdom and God’s weakness being stronger than human strength (1 Corinthians 1:25-29)—justified women’s preaching and prophesying because women were both simple and weak. Next, she presented a contextual reading of 1 Corinthians 14:34. She explained that Paul’s restrictions were exceptional and necessary because the Corinthian women were too noisy in church. It was for the sake of order then, that Paul silenced the Corinthian women—and the Corinthian women only—from speaking. Narducci’s third argument was based on her understanding of the freedom of the Holy Spirit to call whomever the Spirit wished—women or men. As Paul himself would later explain to the Corinthians, “where the Spirit of the Lord is there is freedom” (2 Corinthians 3:17); and since this was so, Paul could not curb the freedom of the Holy Spirit to call women to preach, teach, and prophesy.

2.  French noblewoman Marie Dentière (1495 – ca. 1561) left the Augustinian convent in Tournai in the early 1520s to take refuge in Strasbourg among supporters of the Protestant Reformation. She became a vocal advocate of women’s right to speak and preach on religious matters. In 1539, Dentière wrote A Very Useful Epistle Composed by a Christian Woman of Tournai. Her pamphlet—in which she counters traditional interpretations that associate women with evil and restrict their roles in ministry—was addressed to Marguerite, Queen of Navarre, and 400 copies were distributed in France and Switzerland. Dentière defends women, citing examples of leading women in both the Old and New Testaments. She points to the Samaritan woman in John 4:28-29, who went back to the city after her encounter with Jesus and invited others to come and meet the Messiah. Second, she draws on the account of Jesus’ post-resurrection appearance to women and Mary Magdalene’s “preaching” to the disciples (Mark 16). Dentière uses the terms “preach” and “woman preacher”, to underscore her point that women should teach doctrine not only to other women but to everyone.

3.  Margaret Askew Fell (1614-1702), Mother of Quakerism, wrote a book with a very long title:Women's Speaking Justified, Proved and Allowed of by the Scriptures, All Such as Speak by the Spirit and Power of the Lord Jesus And How Women Were the First That Preached the Tidings of the Resurrection of Jesus, and Were Sent by Christ's Own Command Before He Ascended to the Father (John 20:17).

Like Narducci, Fell explains that Paul’s injunction against women speaking in Corinth had to do with the general confusion of the church at the time. But she also points out that only a few verses earlier, Paul adjoins men to be silent in church (1 Corinthians 14:28, 30). She, too, reads Paul’s directive for women to be silent in light of Paul’s earlier instructions about how women should behave when they pray and prophesy in 1 Corinthians 11, and comments on the similar Pauline restrictions on women in 1 Timothy 2:11-12, arguing contextually that Paul is writing to novices rather than forbidding women’s preaching entirely.

Like Dentière, Fell draws on other parts of the Old and New Testament noting, for example, that Priscilla taught Apollos (Acts 18:26) and that Paul himself asked the Philippians “to help these women, who have labored side by side with me in the gospel together with Clement and the rest of my fellow workers, whose names are in the book of life” (Philippians 4:3). Fell also cites numerous examples of women in the Old Testament who spoke publicly. Following each of her many examples, she asks rather tongue in cheek, “now let us see if any of you blind Priests can speak after this manner, and see if it be not a better Sermon than any you can make.”

In Fell’s final arguments against universalizing Paul’s silencing of women, she cites the long-standing practices of the Anglican Church to recite the “sermons” of Elizabeth and Mary, “two women [who] prophesied of Christ,” during services of Common Prayer. She suggests that it is ironic that the clergy who oppose women who are called to preach in the seventeenth century are “making a Trade of Women’s words to get money by.”

Many of the arguments mounted by these three remarkable women are used today by those who share their convictions about women’s call to preach and teach the good news of the gospel. Sadly, their wisdom did not become part of the great tradition that was passed on to subsequent generations.  It is our responsibility to make sure these women are not forgotten again. We need to rewrite our histories to include their voices so that each generation does not have to wrestle—as if for the first time—with the less clear teachings of Scripture about women in ministry.

For more information on these and other women interpreters of the Bible, see Handbook of Women Biblical Interpreters. Edited by Marion Ann Taylor (Grand Rapids: Baker, 2012).

That’s What She Said is a podcast devoted to telling the stories of historical women who taught others about the Bible, from the pulpit, and from the page. What did they write? What did they say? And why have we never heard of many of them? Join your hosts Dr. Marion Taylor and Kira Moolman as they dig up the words of these forgotten women and explore their lives, their influences, and their relevance for today.