On Being an Immigrant | Wycliffe College
Skip to main content

On Being an Immigrant 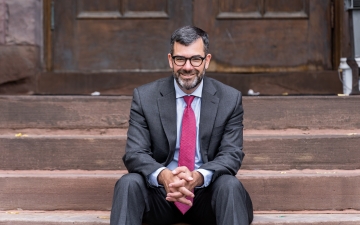 I am now beginning my fourteenth year as an immigrant. In 2008, my wife and I, along with our young son, moved from the USA to Scotland to pursue my PhD. In 2012, we moved from Scotland to the southwest of England so I could take up my first teaching post in a theological college (then with two more children in tow). And most recently, this past summer we moved yet again to Canada where I now teach here at Wycliffe College. That’s three different countries traversed so far, and although my knowledge of the English language has served me well in each one, each of these journeys have led me to experience my own “foreignness” in different ways. While it hasn’t always been easy, I am grateful to have reached the conclusion that being an immigrant gives one a taste for what the Christian life most naturally should be. To my mind, there are several reasons for this.

Being an immigrant means learning to be comfortable with never fitting in. The longer one lives in a foreign country, the greater the temptation becomes to try to “pass” as a native. Practically speaking, I knew how to live in England—I knew the culture reasonably well, and I knew many of the unspoken rules of conversation (e.g., the proper response to “y’alright?” is not an actual account of how you’re doing; it’s “yeah, alright?”). But the truth is, I could never erase my pesky accent. No matter how long I lived there, the assumption of others would always be that I was just passing through. And I had to learn to be okay with that. I was a foreigner, as I am now, here in Canada. And that means my voice, my posture, my demeanour, even my way of being in the world, will always seem slightly “off” to the people I encounter. They can pick me out in a crowd, no matter how I might try to fit in. There is, in other words, a distance between myself and the culture I inhabit.

Being an immigrant means being a student. When living in a foreign place, you have to learn to resist the urge to “educate” the host culture, to judge your friends, neighbours, and colleagues by the lens through which you see the world. This need not be malicious. We generally can’t help to see things the way we do. And when people operate outside of the frame of that lens, we can become confused or even agitated. But entering a different culture means coming to grips with the fact that others interact with the same world in vastly different ways. And living amongst another culture means learning to be self-critical and reflective, learning to be open to new ways of seeing and experiencing things. It means taking the posture of a learner, which is to say, a posture of humility, under the assumption of ignorance.

Being an immigrant means learning to rely on hospitality. There is something deeply formative that happens when you realize you are no longer the host but the hosted, when you enter a place in which there is not yet space for you. It is a vulnerable thing to see one’s seat at the table not as a right but as a gift. And often this means learning to wait for the host to make the first move rather than elbowing in and claiming space for yourself. But if you can do this, if you can wait, you can play a crucial role in setting the conditions for a new kind of thing to be forged: fellowship.

Being an immigrant means recalibrating your identity. Identity is a tricky sort of thing. There are aspects of our identities that are simply given, for instance, being human. But there are other parts of our identities into which we allow ourselves to be educated. For me, that meant, being American—and 15 years of full-time education, not to mention 28 years of full-time life, reinforced that as a core part of my identity. But after more than a decade of living overseas, that identity became increasingly marginalised. Apart from the infotainment otherwise called “the news,” I didn’t know what was happening in my home country, and most of my time was being spent receiving the catechism of another culture. At a certain point, I became an inhabitant of something called a “third culture”—not quite American, but not quite British. And that meant rethinking in certain respects who I actually was. Being an immigrant is disorienting in this respect, even as it provides an opportunity to question the way one defines oneself, perhaps for the first time.

Being an immigrant means longing for your home. The great prophet Rich Mullins once wrote of his own homeland in light of the eschaton: “I wish that I could take you there with me.” As much as being an immigrant destabilises and recalibrates your identity, there is another, equally self-reflective realization that occurs: the recognition that you will always have been formed and thus can never be untethered completely from your homeland. It is a part of you, and at a certain point, this must be acknowledged, not just resignedly, but also gratefully. But this feeling can only be described as “longing,” because even if you were to return after a long sojourn, your homeland will never be quite “home” again. Not only have you changed in the meantime, but it has changed in your absence. In fact, you might say, what “home” really means can never be fully known until it’s left in the past. And so, immigrants will always long for that place of rest in a new, even if aching sort of way.

In his first epistle, the apostle Peter calls his readers “exiles” and “strangers” in the world. It is my conviction that Christians must learn to live in their culture as immigrants—to live like the nomadic patriarchs, the wandering missionary apostles, and even Jesus himself, the divine prophet bereft of a place to lay his head. Rather than seeking to colonise the world, to make the world more comfortable and fitting to our tastes, we must learn to tolerate a perpetual measure of discomfort, an awkwardness that bespeaks our citizenship in a hidden kingdom yet to be fully revealed. And that means interacting with our neighbours as the foreigners we are. It means taking a posture of humility before the world, not as retreat or surrender, but as a prelude to the kind of genuine fellowship that only the Spirit of peace can establish.

The old Sunday school adage is true: Christians are in the world, but not of the world. But there is more: we are in the world, yes, but as guests, not hosts. We are not a “constituency” of the world, fighting for space and elbowing our way into the conversation. We know that the kingdom of this world is soon to become the kingdom of our Lord and of his Christ. But this is not cause for triumphalism, but patience. It frees us to live as Christ did, to die for our neighbours rather than to fight for their conquest. This is what it means to live not from a spirit of fear, but of power, love, and self-discipline (2 Tim 1:7).

And lastly, being a Christian in this world means longing for home—our true home in a world reconciled to God and in God’s beatific presence. There should be an ache in the Christian heart for this place. But like a parent trying awkwardly to recreate their own childhood memories at Christmas, we must learn that home is something we receive; it is something that happens, and therefore cannot be manufactured. This calls, yet again, for patience and hope, even endurance.

Again, in the lyrics of Rich Mullins: