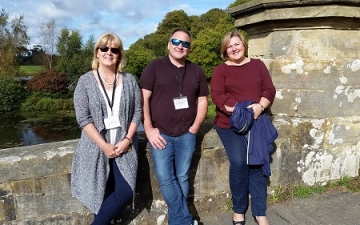 Late last month in Sussex, England, Wycliffe’s Professor of Evangelism Judy Paulsen attended an international learning community on Fresh Expressions—a movement that explores different ways of doing church. (Judy is pictured at far left with the other members of the Canadian team, Mark Dunwoody, and Susan Bell. Missing: Rob Dalgleish who was taking the photo.)

The gathering drew together eight multi-denominational teams from Canada, the United States, the United Kingdom, Sweden, Germany, Australia and southern Africa. We invited Judy to participate in a Q & A in the hope of sharing in some of her learning from the trip.

What is Fresh Expressions?

Judy:     Fresh Expressions is a movement that began in the UK, exploring different ways of doing church—specifically in order to reach unchurched and de-churched people. The term “fresh expressions of church” was a British term. It wasn’t meant to be a hard and fast descriptor, but it’s come to include things like Messy Church and Café Church, as well as other forms of church shaped to reach special subcultures within our culture.

Why did you go?

Judy:     I was interested to hear what has happened in the spreading out of this movement. It’s not a centralized, controlled development; it’s a much more free-flowing movement that has taken off in different ways in different places. I was invited to be part of the Canadian team that was composed of Mark Dunwoody who is Missioner for the Anglican Diocese of Montreal (and team leader for Fresh Expressions Canada), Susan Bell who is Canon Missioner for the Anglican Diocese of Toronto, and Rob Dalgleisch who works in community connections and congregational development with the United Church of Canada.

What were your hopes for participating?

Judy:     My hope was to get a sense of where the movement is going internationally. To be with other people who really care about people who are unchurched and de-churched. "De-churched" is a term that was used in the book Mission-Shaped Church (Seabury Books: 2010) in the UK. They were trying to get a sense of who’s not in church, the people who’ve dropped out of church. Some of these people are open, that is, they might consider coming back to church. And then there are those who are closed, they’ve stopped going and they aren’t open to going back. There are also people who are marginally churched, they still consider themselves to be part of the church but they’re there very infrequently. The Fresh Expressions movement seeks to share the gospel with unchurched people and to connect with dechurched people.

What did you learn that shocked or surprised you?

I was also interested to hear how contextually, specific churches are reaching certain subcultures. There are surf churches that meet on the beach, skateboard churches, so many different ways in which the Church is going beyond traditional walls to be a presence in the community in a distinctly Christian way. I just found that fascinating. One of the guys on the German team came to Christ through a Café Church; he was able to hear the gospel in a café setting because the setting seemed safe and comfortable to him.

What did you learn that inspired you?

Judy:     I heard stories of people coming to faith and finding healing, wholeness and purpose in their lives as a result of finding God. That’s always an extraordinary thing, how the gospel transforms people’s lives, the lives of their families, and their communities. We sometimes forget that it’s our job to be sharing this gospel, this good news.

What was the most significant take away for you from the event that might also have value for others?

Judy:     The Fresh Expressions movement can take many, many forms. It doesn’t take a lot of money. What it takes is a passion for people. That’s really all it takes.

We heard story after story of free space being offered. There are lots of coffee shops closed at particular times because they don’t have any traffic at that time. Churches can approach them and say, “Can we have 90 minutes at this time? We’ll bring a bunch of people, and we’ll buy coffee!” It takes a willingness to build relationships and a passion for people that don’t know the gospel.

There are lots and lots of venues in which people who might not feel comfortable in a church building do feel comfortable. Dinner Churches—where Christians are meeting in small numbers and inviting non-Christian friends to come and talk about spiritual things. Many of these Fresh Expressions of church are small, the vast majority are small. But the sheer number of them means that they are connecting with thousands and thousands of people.

Finally, one of the other things that impressed me was the multi-denominational character of the conference. There were team members from Vineyard churches, Anglican churches, the State Church of Sweden, the Uniting Church in Australia, Lutheran, and Baptist churches. But no one was talking about denominations. What excited these people—all of these people—was mission. And as we worshipped together it was beautiful. It was a lived ecumenism. It was really great.