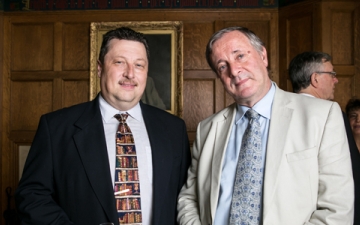 Dr. David Guretzki (at far left) is Executive Vice President and Resident Theologian of The Evangelical Fellowship of Canada. He is pictured with Dr. Alister McGrath, Andreas Idreos Professor of Science and Religion at the University of Oxford. The two met on Friday, September 15, 2017 at a pre-event dinner for the "Is God a Figment of Our Imagination?" discussion, part of the Religion and Society Series.

On September 15, I witnessed a debate (of sorts) between Dr. Alister McGrath, Oxford theologian and scientist, and Dr. Michael Shermer, American science writer and editor-in-chief of Skeptic magazine. Hosted by Wycliffe College's "Religion and Society" series (and co-sponsored by several Christian and secular organizations) the event took place at Convocation Hall on the University of Toronto campus. The question of the evening was, “Is God a figment of our imagination?”

And the winner of the debate was…

Before giving my answer, let me say that this was far from a typical debate. Whether one came to the event as a theist or a non-theist, there were nuggets to take home from both sides.

Apart from whether one found one or the other speaker more compelling, in the end, I was much more impressed by the kind of conversation that took place.

Here were two people who represented diametrically opposed positions on many issues, but who nevertheless took the time to listen to one another, to express points of agreement, to highlight points of significant disagreement, and who managed to do it all without ever appearing to get angry or to break out into a shouting match. Moreover, and most impressive, was how often each conceded to the other either a good point, or a question to which they admitted they didn’t have a full or possibly satisfying answer. Consequently, the thing that defined the night for me was that really, it wasn’t a debate as much as a genuine conversation and dialogue.

Although McGrath and Shermer were each given 20 minutes to present prepared remarks, I thought the more valuable part of the evening was the conversation that took place after their statements. Faith Today editor Karen Stiller served as moderator, and her questions sought to probe the positions of both. Questions were also received from the audience via text, Facebook and Twitter. Throughout, humour punctuated both presenters' speeches, but there were also moments of emphatic assertion, particularly on the perennial question of human suffering.

To be honest, from the point of view of content, I do wish that both McGrath and Shermer had taken more risks; I was unsatisfied at times with what was said, and perhaps more importantly, with what was left unsaid.

Shortcomings aside, there was a clear winner in this event, and it was . . . free speech.

I walked away supremely satisfied that it is indeed possible for people with radically different points of view to have a conversation, and to do so without being shouted down - by one another or by the audience - something which seems to happen so often these days on public university campuses.

In that regard, I say “Bravo!” to this event, not because I changed my mind (I suspect few in the audience did), and not even because I think one or the other presenter was superior in their arguments. Rather, McGrath and Shermer modeled for us a picture of what democratic tolerance ought to look like. Indeed, the audience modeled what public participation in dialogue can and should be.

Tolerance, after all, is neither about forced agreement nor about pretending that differences of opinion do not exist. Democratic tolerance is, however, the ability of parties who disagree on fundamental issues to be able to say so in a public setting with respect for the other person’s dignity, and without fear for their own personal safety, for stating what they believe.