A Flight of Parsons: The Divinity Diaspora of Trinity College Dublin 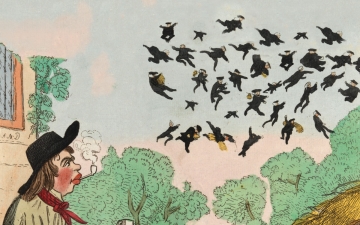 Wycliffe College’s own Thomas Power is celebrating the release of his latest book, A Flight of Parsons: The Divinity Diaspora of Trinity College Dublin. As the editor, Power brings together the work of scholars from Canada, England, Australia, and Ireland to examine the experience of Irish Anglicans in the nineteenth century. The book pays particular attention to clergy who were graduates of Trinity College, Dublin (TCD), and their lay associates, the formative influences on them, and the varied contributions they made and legacies they left in England, Canada, and Australia. Thomas (TP) shares more about the background to this project below.

TP:       I have a longer-term project to examine the curriculum, faculty, and students of the Divinity School of Trinity College Dublin in the early 19th century. The current collection is in part an interim report on that project, and also brings together others who have research interests in cognate aspects of the topic. I was also interested in those Irish or those of Irish background who were among the founders of Wycliffe College, notably Rev. Frederick O’Meara and Samuel Hume Blake.

TP:       In the broader historic field there is a current interest in diaspora studies. That is research on discrete groups who participated in the imperial project, primarily the British imperial exercise in the 19th century. Researchers are interested in the circumstances that propelled such groups outward, their reception in colonial settings, settlement patterns, social and cultural and economic legacies, and the impact on the home country. So in terms of this broader pattern, this collection examined the formative influences on Anglican clergy in Ireland in the 1820s and 1830s, identification of the push and pull factors that propelled them outward, their reception in England, Australia, and Canada, and their distinctive contribution and legacy to the church in these countries. Study of such a group contributes to the burgeoning literature on diaspora studies.

Q:        As an Irish Canadian Anglican, you obviously have a personal interest in the subject matter covered by the essays you’ve brought together here. Do you have a personal connection to Trinity College Dublin?

TP:       Yes. I am a graduate of Trinity College Dublin (though not in theology), but I have always been curious as to how its graduates contributed to the Canadian Anglican church. I was anxious to discover if there was any connection with Wycliffe College, given its evangelical commitments. Being a theological educator, I have been interested in the origins of Wycliffe College and the background of its founders. I had always known that the contribution of Irish Anglicans had been distinctive from their English or American counterparts, given their evangelicalism came to be demonstrated in missionary work, anti-Catholicism, lay leadership, and scholarly endeavors. But its precise dimensions were unclear and so I decided to take on the task of clarification, and invite others to participate in the task as well.

TP:       The book should appeal to those with an interest in worldwide Anglicanism, and the formative influence Irish clergy had on it particularly in its evangelical dimension. It should also appeal to those interested in diasporic studies generally and Irish diaspora studies particularly.

Diaspora studies typically focus on the political, economic, and cultural impact of specific groups on the host society or country. This book investigates how a specific group in time and place, Irish Anglican clergy and their lay cohorts contributed to the creation of a spiritual empire.

Q:        What was the most surprising/shocking thing you learned in the course of your work on this book?

TP:       I was struck by the fact that Irish Anglican clergy exerted an influence on the church and society in England, Canada, and Australia beyond their numbers.

TP:       Originally I had a very unwieldy title (something like “Old World Antecedents, New World Adaptations: Irish Anglican Influence etc.”) but in a discussion around the supper table with my wife and daughter, they came up with the current title which is more evocative, alliterative, and appealing. The main title, “A Flight of Parsons” comes from a caricature of the same name in the Robinson Collection, Trinity College Library Dublin.

TP:       “Divinity Diaspora” is intended to convey that the subject matter of the book concerns a study of clergy who emigrated from Ireland and the impact they had in their place of settlement.