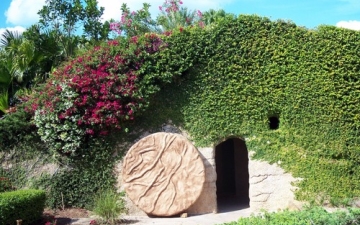 But on the first day of the week, at early dawn, they came to the tomb, taking the spices that they had prepared. They found the stone rolled away from the tomb, but when they went in, they did not find the body. While they were perplexed about this, suddenly two men in dazzling clothes stood beside them. The women were terrified and bowed their faces to the ground, but the men said to them, “Why do you look for the living among the dead? He is not here, but has risen. Remember how he told you, while he was still in Galilee, that the Son of Man must be handed over to sinners, and be crucified, and on the third day rise again.” Then they remembered his words, and returning from the tomb, they told all this to the eleven and to all the rest. Now it was Mary Magdalene, Joanna, Mary the mother of James, and the other women with them who told this to the apostles. But these words seemed to them an idle tale, and they did not believe them. But Peter got up and ran to the tomb; stooping and looking in, he saw the linen cloths by themselves; then he went home, amazed at what had happened.

Jesus was dead; no doubt about it. The political and religious authorities had issued his death warrant; professional military executioners carried out the order, and friends, family, and foes watch the gruesome scene in fascination and horror. After three exhilarating years of proclaiming God’s coming kingdom…preaching, healing, and demonstrating the depths of sacrificial love, Jesus now hung on a cross while others picked up whatever pieces remained. A wealthy man named Joseph of Arimathea offered his own tomb; a clutch of loyal women made plans for Jesus’ final burial rites; most of the others fled in fear and disillusionment. Yes, Jesus was dead.
Death is ugly, even so-called good deaths, wherein individuals lead good, long lives, demonstrating many of the cardinal virtues. No matter how much we sanitize death…even changing its very language, in which ‘dying’ becomes ‘passing,’ death is still the final enemy which none of us can ultimately dodge.

The faithful women made their way to Joseph’s tomb, carrying spices and ointments to complete Jesus’ embalming, having delayed for a day to observe the Sabbath. What awaited them completely contradicted their expectations. The now-open tomb was an empty tomb; how do you explain that? Confused, they were confronted by mysterious angel-like figures: He’s not here; he’s not even dead any longer; he is risen. Don’t you remember? Piece by piece the picture slowly becomes clearer, although when the frightened disciples heard the women’s testimony, they were uniformly skeptical, including the apostle Peter who explored the tomb for himself yet still wondered what had happened.

The journey from fear to faith is seldom straightforward. One or two steps forward…one or two steps backward. Slowly… gradually… baby steps stretching into confident strides, even then the possibility of stumbles and tumbles remain. How can we progress toward a vital faith that will sustain us along difficult paths? For sure we need to be grounded in the saving events of Easter. Jesus died – really, clinically died. Then he was alive again; people met him; Joseph got his tomb back. (Anybody want a gently-used grave?) And as the band of Jesus’ followers gathered to tell and retell the gist of these astonishing events, and as they broke bread and shared the cup, a new movement was born, which, quickened by Holy Spirit, turned the world upside down. This Easter, as we ponder anew these saving events, let us celebrate and proclaim the heart of Christian faith and hope: The Lord is risen; He is risen indeed! And as God raised him from the dead, so will he raise us into his awesome presence!

Blessed are you, Lord God of our salvation,
to you be praise and glory for ever.
As once you ransomed your people from Egypt
and led them to freedom in the promised land,
so now you have delivered us from the dominion of darkness
and brought us into the kingdom of your risen Son.
May we, the first fruits of your new creation,
rejoice in this new day you have made,
and praise you for your mighty acts.
Blessed be God, Father, Son and Holy Spirit.
Blessed be God for ever. 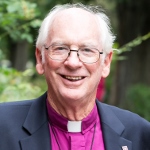 Bishop Peter Mason is the current interim Principal of Wycliffe College. Previously he was Bishop of the Diocese of Ontario, and before that he was the real Principal of Wycliffe. Peter and his wife Carmen have three adult children, four grandsons, and a sweet Sheltie dog named Charlotte.