Have you got what it takes to interpret Scripture? | Wycliffe College
Skip to main content

Have you got what it takes to interpret Scripture? 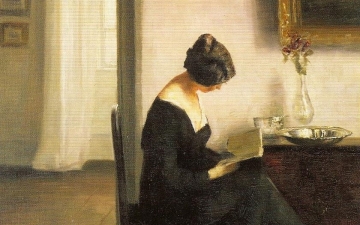 Hidden away in the November 1921 edition of Nazarene Messenger, the official paper of the early Church of the Nazarene in Los Angeles, is an article titled “Qualifications of an Interpreter” written by Olive May Winchester (1879-1947). Winchester was well-qualified to write about what it takes to interpret Scripture. She had an undergraduate degree in Semitic languages from Radcliffe Ladies College, a college associated with Harvard (1902); a Bachelor of Divinity degree from the University of Glasgow (1912); a Master of Sacred Theology from the Pacific School of Religion (1917), and in 1925, she would become the first woman to complete her doctoral degree at the Divinity School of Drew University in New Jersey. Winchester was also the first woman ordained into a Christian denomination in Scotland (1912). She was a professor of Biblical Literature and Theology at Northwest Nazarene College in Idaho when she wrote her article about the three qualifications needed by every careful interpreter of Scripture.

Winchester believed that first and foremost an interpreter needed “a real experience of spiritual realities.” “The Holy Spirit,” she argued, “is the great illuminator of divine truth.” But in addition to having “communion with the Spirit,” she suggested that an interpreter needed “other essential characteristics and qualities, such as faith in the divine inspiration of the Bible, a desire to know the truth, a tender affection for the truth, enthusiasm for the truth, a reverence for God, and also a cognition of the spirit of prophecy.”  This last quality reflects Winchester’s commitment to the holiness tradition of the Pentecostal Church of the Nazarene and the Pentecostal Church of Scotland.

In addition to spiritual qualifications, Winchester’s ideal biblical interpreter needed both natural and intellectual aptitudes. These included “a sound well balanced mind” that applied itself to the study of the contents of Scripture; “an acuteness of intellect to analyse and compare, [and the ability] to see the real teaching and application of the passages under consideration;” and “reason,” which enabled a person to evaluate various interpretations, including those that “transcend the realm of pure reason.” Winchester also encouraged interpreters to use their imaginations to enter into the ancient world of the text. She believed that imaginative readings allowed the interpreter to interpret the text historically “in that [imagination] constructs bygone ages;” psychologically,“in that [imagination] depicts [characters’] thoughts and motives,” and ethically “in that [imagination] estimates aright [characters’] moral standards.” An imaginative and sympathetic hermeneutic, she suggested, led to appropriate contextual applications of Scripture.

Thirdly, Winchester believed that interpreters needed much more than spiritual experiences and intellectual qualifications to properly interpret Scripture. Her list of subjects that impact interpretation included “all one gathers from the fields of psychology, philosophy, history, general literature, natural science, sociology, education, comparative religion, Greek and Hebrew, and ancient manners and customs.” Recognizing that it takes hard work to become a well-rounded interpreter, Winchester encouraged diligence, suggesting that study brings a person the kind of joy that the psalmist talks about:

their delight is in the law of the Lord,
and on his law they meditate day and night.
They are like trees
planted by streams of water,
which yield their fruit in its season,
and their leaves do not wither.
In all that they do, they prosper. (Psalm 1:2-3 NRSV)

As we inch toward the end of a very busy and full semester, it is good to keep Winchester’s list of qualifications that an interpreter of Scripture needs in mind. By placing spiritual qualifications first in her list, she reminds us that intellectual gifts and education alone do not qualify a person to rightly interpret Scripture (2 Timothy 2:15).

May we all seek to be the kind of interpreters who keep God at the centre of our lives so that we can find joy in study as we seek to be like fruitful trees planted by the rivers of water.