How by doing what churches told them to do -- they failed their kids. | Wycliffe College
Skip to main content

How by doing what churches told them to do -- they failed their kids. 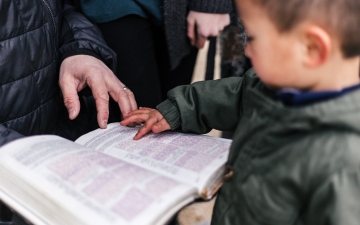 Esther was one of many gracious life-long members of our church. A real salt-of-the-earth type, who with her husband had raised three kids to be successful, fully-launched adults. She was now thoroughly enjoying a bunch of grandkids, most of whom were already teenagers. But Esther was troubled by something. The focus of the sermon that week had been on God’s call to teach the faith to the next generation. I noticed her waiting, as other parishioners cleared out, so she could have a private word with me at the back of the church.

She and her husband had raised their kids in the 50s and 60s and done exactly what the church of her generation had told her to do. This was the age of a professionalized model of Christian education when Sunday Schools were packed and Youth Groups flourished. Mid-week children’s programming also thrived, with large percentages of kids enrolled in Cubs, Scouts, Brownies, Guides, or Girl’s Auxiliary. Parents dropped their kids off, confident that they were doing the right thing to help shape their children’s spiritual lives. Trained leaders would teach them what they needed to know.

So what did go wrong? The children who packed Sunday Schools across Canada in the 60s are the same people largely absent from churches today, and their own children are even more likely to be missing. While a myriad of factors likely contributed to this situation, simply put, the professionalized model of Christian education obviously failed. The fruit (or lack thereof) of this approach was first seen in the mainline churches but is now also becoming obvious in evangelical communities of faith.

Here are some questions many churches are beginning to grapple with.

How did we let go of the home as the centre for kids’ spiritual development? How did Sunday School teachers and youth group leaders replace parents as the primary spiritual educators of their children? And most importantly, what needs to change so that the Church can pass the Christian faith to more of the next generation?

One thing is clear; it’s time to hear again the words of Deuteronomy 6:6-9,

“Keep these words that I am commanding you today in your heart. Recite them to your children and talk about them when you are at home and when you are away, when you lie down and when you rise. Bind them as a sign on your hand, fix them as an emblem on your forehead, and write them on the doorposts of your house and on your gates.”

Simply put, let’s find a way to do the following:

(1) equip parents to teach their children about the faith through their everyday conversations and practices, and (2) involve children together with their families in the full worshipping, studying, serving, and playing life of the church.

Of course, there are no guarantees that a given child will embrace the faith as their own. Nevertheless, we all have a sense that the church can do better at encouraging this. Let’s more intentionally help Christian parents parent as Christians. Let’s not fail tomorrow’s Esthers. Instead, let’s equip, empower, and celebrate them in that crucial role as disciple-makers.

Judy Paulsen is Professor of Evangelism and Director of the Institute of Evangelism at Wycliffe College. If you enjoyed this blog post, you may also appreciate "Why It's Never Too Late to Study Theology" or "Different Ways of Doing Church."