Of innocent blood and exile 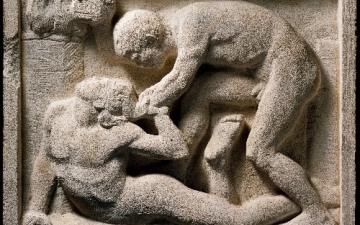 Limestone sculpture by Adolf von Hildebrand (1847 – 1921) depicting Cain’s murder of his brother Abel. In the following blog, Wycliffe's Dr. Catherine Sider-Hamilton shares some of the journey of learning and thinking that gave rise to her new book, The Death of Jesus in Matthew: Innocent Blood and the End of Exile.

It all started (my dissertation, now this book just published) with a question. “Why so many?” Prof. John Kloppenborg asked, in regard to Matt 23:35. Why do so many have to die? He was talking about Jewish interpretation of Matt 23:35. In that verse, Jesus imagines a world bathed in blood: “that all the innocent blood poured out upon the earth, from the blood of Abel the righteous to the blood of Zechariah…, might come upon you.”

In this vision Jesus is not alone. The rabbis also were fascinated by the blood of Zechariah, and in their telling Zechariah’s blood (barely mentioned in the account of his death in 2 Chron 24) has become a vast sea, boiling insatiably in the streets of Jerusalem, demanding a terrible recompense. Therefore Nebuzaradan enters the city with the armies of Babylon and carries out a great slaughter: 80,000 young priests dead in the Jerusalem Talmud, 940,000 men, women and schoolchildren in the Babylonian Talmud.

In the rabbis, Zechariah’s blood brings destruction upon Jerusalem; it is an explanation for exile. Interestingly, this is Jesus’ logic too. All the innocent blood will come upon this generation, Jesus says in 23:36; “Jerusalem, Jerusalem,” he cries at 23:37-38: “city that kills the prophets and stones those sent to her… Behold, your city is left to you, desolate.” From the blood of Zechariah and the blood of Abel to exile.

Why? Why this vision of innocent blood drowning the land? Why does innocent blood—finally Jesus’ innocent blood—lead to exile? The question is pressing because of the real and long history of anti-Judaism, especially in the church.

Here we have a Gospel that correlates the destruction of Jerusalem with the death of Jesus. Is this Gospel, as many scholars have argued, therefore anti-Jewish, a grim prophecy of the rejection of God’s people, proclaiming the end of Israel?

The rabbis’ interest in the blood of Zechariah caught my attention, and I began to explore. I discovered a similar interest in the blood of Abel in Second Temple Jewish literature. Jesus, it turns out, stands in a tradition—a Jewish tradition of reflection upon Abel’s innocent blood poured out upon the land, and the innocent blood of Zechariah poured out on the temple stones. Abel’s blood serves, like Zechariah’s blood, as a figure, blood and flood pointing forward to exile (“blood touches blood”, the Jewish interpreters would say, quoting Hosea), pointing forward for Matthew to Jesus. But it is a figure with concrete roots and historical force. The blood itself matters.

As I read these traditions, so foreign to our thinking in their fascination with blood and in their multi-valence, at once concrete and figural, their logic began to emerge. In the Zechariah and Abel traditions alike, the problem with blood—innocent blood—is that it pollutes. “For blood pollutes the land, and no expiation can be made for the land, for the blood that is shed in it, except by the blood of the one who shed it. You shall not defile the land in which you live, in which I also dwell” (Num 35:33). A whole world opened up in front of me, a world strange to the contemporary reader but deeply rooted in the Hebrew scriptures and still current in the literature of Jesus’ time and beyond: the world of purity and pollution.

Matthew’s gospel places the death of Jesus within a complex of ideas having to do with purity and pollution, the sanctity and danger of blood and the defilement of the land. Innocent blood is a danger to the life of the people in the land. For the prophets, as for a good deal of Second Temple Jewish literature and the rabbis, Israel’s exile was seen as the inevitable result of the pollution of the land, a pollution of which innocent blood was sign and summary.

Jesus places his death within this ancient and biblical saga: the problem of pollution, the sin of God’s people known concretely in innocent blood poured out on the land, and the devastation it causes. Innocent blood runs through Matthew’s Passion Narrative like “a bright red thread” (as Carroll and Green note), from Judas’ confession (“I have sinned in delivering up innocent blood” [27:4]) through the blood money and Field of Blood that follow, to Pilate’s handwashing (”I am innocent of this man’s blood”  [27:24]) and the people’s ominous words: “his blood be upon us and upon our children” (27:25).

Jewish reflection on the problem of innocent blood helps us understand the death of Jesus in Matthew. Sin is concrete, in the thinking of Israel and in the Gospel of Matthew, written in blood on the land. Its roots are in Cain’s bloodshed and its consequences are concrete too. Jesus sees the armies at the gate: “Jerusalem, Jerusalem!” he cries, in the wake of Abel’s and Zechariah’s innocent blood, in anticipation of the cross.

But the story does not end here—nor does it end with the cry of the people in 27:25. The last word is not here, with the blood upon the people’s heads and the real devastation to which it points. The last word is heard precisely in the cross-and-resurrection that follows. It is here that we learn the meaning of the figure. I will let you read the book to see what that last word is.

But this much can be said here: If the cost of sin is real in Matthew’s telling—Jesus dies; Jerusalem is destroyed; the Gospel does not skate over this real tragedy in the life of God’s people—nevertheless devastation is not the final word. In keeping with the innocent blood traditions of early Judaism, Matthew’s gospel sees in cross and resurrection precisely purgation. After the flood in the wake of Cain’s bloodshed there is a new creation. After exile, restoration. The boiling blood of Zechariah is swallowed up by the mercy of God, in the end, and the wicked Gentile is converted to the faith of the city he has sought to destroy.

Is this a Gospel hostile to Israel? By no means. Jesus in Matthew’s gospel thinks with the Hebrew Scriptures and with the Scriptures’ Jewish interpreters. This is a Gospel immersed in the interpretive life of the Jewish people. It is a Gospel to which—a Saviour to whom—Israel, its fate and future, is central from beginning to end.

And its final Word, for Israel and in Israel for us all, is hope.

Dr. Catherine Sider Hamilton's new book, The Death of Jesus in Matthew: Innocent Blood and the End of Exile is published by Cambridge University Press, 2017.