The “missing link” in creation vs. evolution debates 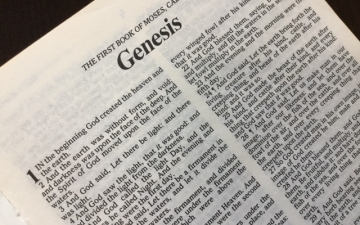 There is something vital missing in many debates about creation versus evolution, and that is the voice of the biblical scholar.

As an evangelical biblical scholar who studies creation accounts in the Bible and also in other documents in their original context, I am frustrated by debates on biblical creation versus evolution that feature experts from only the science side of the equation but not from the Bible side. Biblical scholars are the “missing link” in these discussions.

A close look at the Hebrew narrative of Genesis 1 suggests that the Holy Spirit was addressing pertinent and timeless questions that were vital then and remain so today. For example, in ancient Egyptian cosmological texts the sun god creates the world; and, in other creation accounts, “sun,” “moon” and “sea” are the names of other gods. The fact that none of these words are mentioned in Genesis 1, despite their relevance to the subject for ancient audiences, provides an important clue about the purpose for which Genesis 1 was written: to tell us that there is only one God and that this God exists independently of all heavenly and earthly entities. This revelation was the ancient equivalent of what we today would call a “scientific” breakthrough.

Genesis 1 is concerned not with “how” or “when” as we think of these questions today, but with the more important and timeless questions of “who” and “why.”  Let’s look at each in turn.

Creation and the who question

Addressing the question “who lies behind the creation?”, Genesis 1 answers with one God; moreover—as can be seen by the ordered nature of creation that unfolds in a poetic-like parallel framing of days completed with seven—this God, unlike His alleged rivals, acts with purpose and power by means of illuminating speech. Value statements like “good” and “very good” imply that, unlike many other gods popular at the time, this God is a moral being. What better way for a book containing not science but moral episodes and laws to begin?

Creation and the why question

Whereas non-biblical stories of creation typically teach that humans were an afterthought—created to clean up after the gods (and worthy of no mention at all in other creation episodes)—in Genesis 1, humans are the climax of the story. Created to reflect God as both males and females, we are appointed by God to be his governors general, and thus to protect and preserve his interests, all over the earth.

For these and many other reasons, biblical scholars—who study the ancient text in its original language and work to understand its purpose and context—should be invited to debates on Genesis 1 and science. In fact, what Bible scholars can tell us about Genesis 1 ought to be not just an after-thought, but the starting point of such discussions.