A moment redeemed becomes a vehicle of grace 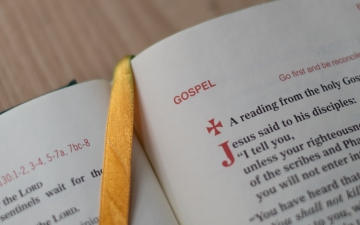 My wife and I were in the United States over the holidays, to see my mother who is aging, wider family, and just enjoy some warmer weather.

During this time we worshipped in a local parish we know. They have a new assistant and he and the rector take turns preaching and presiding. It is a church where preaching is central. The two ministers have different styles but both work hard at preparing. Often one of them is doing a series of some kind, and the other follows the lectionary.

I know the rector well and appreciate his Wesleyian style, with old fashioned hymns and appeal to the heart. Stories from his childhood in a poor family. His love of Jesus.

The assistant is more formally theological, but he works hard at bringing theology to life through illustrations and anecdotes. He has super pace and delivery and is a first-rate exegete. (It is important to remember as a preacher that you should enjoy what you are doing, and make the effort to have that be so because it shows. This is even more true, I think when the preacher likes good ideas and organization.) I emailed the assistant and asked if we could have lunch. He knew my written work and worried, I learned later, that he had made some kind of mistake that I wanted to correct him on. Nothing was further from my mind. We ate bar-b-que and enjoyed a long lunch. He had loved seminary and was eager to discuss this and that.

Humility and kindness in the pulpit

I don't recall how we got onto the topic, but we began to talk about humility and kindness in the pulpit, qualities that are more important, I believe, if one is genuinely intellectually gifted.

He told a story about how in a previous parish some years ago, as a young and dedicated minister, he was set to preach one Sunday. His wife was in the hospital about to go into labour, but he planned to go to the service and then get back to her.

En route to the church the rector called and said he was ill. Then the assistant learned that the deacon had been called to an errand of some kind, and was not present. So he would be on his own. The problem, he confessed, is that he has a bad case of dyslexia, and if he is going to read in public, he has to prepare by going over the text carefully. Only then can he be at peace, mount the lectern, and read the Gospel.

He did not have this time. The service was in front of him. He was unable to turn to a colleague or run through the text even briefly.

We will all have experiences like this. Often they appear in our dreams. We are running behind. Our vestments are inside out. The lectern Bible is missing. We are doing the eucharistic prayer and the pages are all out of order, or missing an index or page numbers.

I couldn’t help but feel sympathy as he recalled working through the first part of the service, my mouth as dry as his must have been as he anxiously anticipated climbing into the pulpit to read an unrehearsed Gospel lesson.

He told me that when the time came, he opened the lectern Bible and began to read the lesson appointed for that Sunday. He said, with anguish, that he just panicked. He could not repeat the words. They were a jumble before his eyes. He made things up, sentences without sense. He knew he was blathering and he knew the congregation knew that too.

When he had finished, he steeled himself and pressed on, preaching his sermon in a kind of fog. He carried on with the remainder of the service, prayers, announcements, Holy Communion, goodbyes to parishioners. I could feel his anguish.

He told me hardly a day passed for many years that the experience did not return to him, and haunt him, reminding him of this awkward, painful Sunday morning. And this from someone clearly dedicated, concerned to do a good job, to be organized and professional and, well, a good priest. Some people never fall from a height because they never aspire to one. Not this man. He was attacked at the place about which he cared most. The experience stayed with him.

Eight years later he was part of a church plant in another state. Now with four kids. Working too hard at the job, but feeling it was going reasonably well. Finances were the problem and that was wearing down him and his family. Dedication, but poured into fragile vessels. That is another story.

One night there was a weekday service with a meeting afterwards. A man lingered behind, approached the assistant and asked if he could have a minute when it was over. Of course, he could.

The man thanked the assistant for the service and said he remembered him from many years earlier. “You won’t remember this,” the man said, “but I was at a service when you were leading worship. You messed up the reading pretty terribly.”

He continued, “I had recently come to faith in our town and had accepted Jesus Christ as my saviour. And yet when I visited churches looking for a home, I always had the sense that people were too perfect, the preacher was polished, the service ran well, and I just felt ill at ease. As though I did not measure up, or the message just did not speak to me, about the honest shortcomings in my life I knew were there.”

“When you messed up the reading the thing that most impressed me is that you carried on. You preached your sermon. You finished the service. That took real courage. I will never forget it. I said, 'This is the church for me and my family.'”

Sitting in the bar-b-que restaurant now years later, this was the story the assistant told. And then he pointed to his cell phone. “You see this little button here? That man invented it. He sold it to a cell phone manufacturer for millions of dollars, and he gave the bulk of that away to missionary work.”

It is important to try hard, to prepare well, to be dedicated to your people and your craft. Even to worry about the job you are doing because, well, it really matters and it can do tremendous things in the lives of people.

Maybe you will also have the good fortune to have the bottom fall out and learn that it is there where God really shows himself to be faithful and good and true.

That is the most valuable gift one can receive, seeing how God redeems the moments we worry expose us as frauds, but that turn out to be vehicles of grace.

I am glad he shared that story with me.

Christopher Seitz is Senior Research Professor at Wycliffe College. Throughout 2018, he hosted a podcast, "Insights with Seitz". Find the archive of episodes here.