The optimism of Ecclesiastes | Wycliffe College
Skip to main content

The optimism of Ecclesiastes 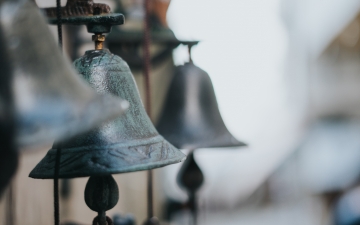 My wife and I live in a small village—a hamlet—in rural France, and as in all the villages around us, we have an ancient parish church, with its strong bells regulating life. The painting “The Angelus” shows peasants with heads lowered in a field. They are our neighbours. We live in the rectory of the village, amidst vast fields, and the bells lift themselves and sound forth just next door.

John Donne famously said, in reference to the tolling of bells at the death of a local friend or citizen, “Ask not for whom the bell tolls, it tolls for thee.” Death is always with us, though it hides its face. One day it will of course appear.

Death has been a regular tolling presence for me recently. My father died a bit over two years ago, and my mother struggled in the hard years without him before falling asleep in the Lord last month. Her decline was long and painful, so death was a bit easier to accept. We lost our close friend, the local parish priest, Père Mercier, last year. The twenty-some parishes he cared for collectively grieved his loss. He was such a real, honest, humble, witty presence.

And I almost lost my wife after a long struggle with lung and heart problems that hit her unexpectedly. She came fully within death’s precincts. God allowed her to return.

We do not sleep in our coffins and we likely do not work with a skull on our desk to remind us of our mortality. Almost everything we do and create means to keep death’s reality at bay.

Ecclesiastes was an extraordinarily popular book throughout the ages. Thomas Wolfe said it was the greatest single bit of writing there was. But in recent years it has gathered the whiff of pessimism and cynical despair. What has happened to make that so has a hundred good answers, but more important is noting the change.

The hero of the book is in some sense King Solomon, seen from a particular angle of vision. His accomplishments lie behind him. He is still the man of proverbs, but they have become like the irregular verbs we learn last of all as schoolchildren, even though they are the verbs used most frequently in life.

In the 8th chapter of I Kings, Solomon is given to see things in their spatial and temporal vastness.  And this includes messes, and failure, promises dashed to the ground, and indeed death itself. Things will begin unravelling even as his own days draw to a close, in some ways because of his overreach and in other ways because what God had called for was so majestic it would be hard to live up to it all. But God would be there to turn and forgive all the same. Just as He always is. For those who fear Him.

I take the book to be an extended meditation on life and death. Its bells toll for Solomon, for Israel, for the Old Adam, and also for thee. There is no trailer hitch on the back of the hearse. One must learn to enjoy toil without looking for profit. One must not try to be wise but ask for the fear that opens the door to receive it from God. One cannot make pleasure accomplish something, but must rather learn through patience how to allow God to give it. Exceptions to the rules are not things to be cursed but signs that God’s ways do not conform to ours. Our faculties of seeing, hearing, speaking and remembering do not endure forever. They do not match perfectly performance and execution, as does God’s good creation. That is a fact to be received and accepted.

Jesus Christ, Gregory of Nyssa said, is the true Ecclesiast. He who came down and lived within the limits of habel habelim (“vanity of vanities”). He thought equality with God not a thing to be grasped and searched for us, determined to redeem us from death by walking the route before us. To the end that the tolling of bells might shake the portals of death and receive us all in a Kingdom that has no end.

Chris Seitz is an Old Testament scholar and theologian known for his work in biblical interpretation and theological hermeneutics. Senior Research Professor at Wycliffe College, during the Fall 2019 semester, he is teaching a course on The Book of Ecclesiastes. His 42-episode podcast, Insights With Seitz: The Symphony of Scripture unpacks readings from the Gospel of Mark.