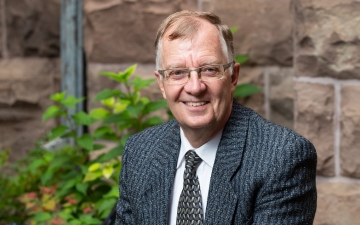 After more than 30 years, Wycliffe College Professor of Scripture and Global Christianity Glen Taylor, has signalled his intention to retire at the end of the calendar year. He expects to remain closely connected to the College.

Describing Glen as "a great asset to Wycliffe’s mission," and "one of the students’ favourite profs," in an email to faculty and staff, Principal Stephen Andrews observed that Glen has always taken a personal interest in the students' welfare, and in particular, in the welfare of the College's international students. In addition to mentoring students, Glen has supervised many doctoral students over the years, almost all of whom have found employment in their chosen field of Old Testament studies.

"He has helped to keep us focused on our evangelical identity," Andrews wrote. "While he is something of a linguistic geek, his warm, personal reflections on the Scriptures, especially in the informal settings of evening chapel services, are an inspiration to those of us who seek to integrate a heart and mind under the loving rule of Christ."

As he approaches retirement, Communications Director Patricia Paddey asked Glen to reflect on his life. We offer an abbreviated transcript of their telephone conversation below.

Q: You’ve written that you grew up in an evangelical Christian home in Calgary.” Did you live in the city proper?

GT: I lived right in the heart of the city. It had a nice country view, but it was in the city itself.

Q: Tell me about your family of origin.

GT: My dad was the first neurosurgeon in southern Alberta. He was very busy and I guess we were quite well off comparatively speaking. Both my parents were devout Christians from an Open Plymouth Brethren background.  My mom was a stay-at-home mom, and they had five kids, four boys and a girl. I was the second youngest.

Q: What are your earliest recollections of an awareness of God?

GT: We went to church every Sunday, and so it was sort of all part of my DNA. But I remember going to summer camps and hearing Bible Conference preachers preach powerful stories of conversion. They talked about your life changing the minute you let Christ into your life. So that led me to doubt, because I’d asked Jesus into my heart and not a whole lot had happened. And my mother finally said, “Just accept it by faith that you are a child of God and carry on.”

Q: Talk about your faith journey.

GT: It hit a high point when we had a very good teaching pastor come to our church, when I was about 16. I was just starting university. He was smart, a great Bible expositor, solid theologian, and he really built my faith up.

And then when I started to study religious studies at university—especially when I went to Scotland—I encountered liberal Protestantism. And it caught me completely off guard, because I had been told that [theological liberalism] was nonsense and intellectually impoverished. And it wasn’t. These were smart people who had real questions about the Bible. So I went through a world view crisis when I was studying alone in Scotland. Then I transferred to a conservative seminary—Dallas seminary—and I was thinking that they would have all the answers to these questions, but I found that they didn’t in every case. So it was a real, intellectual crisis of faith.

But at some point, I realized that Christianity wasn’t a matter of being able to prove the truth, it was a matter of faith. That’s something that Jesus was up very upfront about. He said “If you are looking for a sign, I won’t give you one, but I and the Father are One.” And, “Follow me.”

So I think the word for it would be fideism—you believe on the basis of faith. And that doesn’t mean there’s not evidence for your faith, just that it’s not an intellectual game. My faith journey went from thinking that things were black and white to varying shades of grey, and recognizing that you can’t prove your way into the Kingdom of God. You have to be admitted on the basis of grace through faith.

Q: Looking at your CV, it’s astonishing to see your obvious gift for languages. How old were you when you realized you wanted to make the study of biblical languages a part of your life?

GT: It was when I went to university. I wanted to study Greek and Hebrew because I wanted to go to seminary. I studied Greek in my first year of university. So I would have been 16.

GT: Yes. I was born in December and I skipped a grade. But languages didn’t come easily to me. They actually came very hard for me, and I think that made me a sympathetic teacher because I realized it was just a lot of hard work. But once you learn one language, you have the building blocks to learn another.

Q: If it was so hard, what gave you the desire to persevere?

GT: It was the desire to be a Bible scholar. To do that you need a lot of languages. I learned Greek and Hebrew. And then when I studied Hebrew, people said, “If you really want to understand Hebrew, you need to learn Ugaritic. So I studied Ugaritic and then they said, “You can’t really understand Ugaritic without knowing Classical Arabic.” So, one thing led to another. The fact that I studied Greek and then Hebrew at 16 and 17 gave me a bit of a head start.

GT: Yes. Marion and I were the only Canadians studying the Old Testament at Yale, when we were there. So we had this Canadian connection. She knew French better than I did so she helped me with my French, and I knew Hebrew better than she did so I helped her with her Hebrew. We didn’t have to choose between dating and studying. We were both so busy we knew that any dating we did would really just be study dates. We dated in the library a lot. We were friends first, and a couple second. What brought us together was that Marion had gone through a similar sort of faith crisis encountering theological liberalism and having it challenge her worldview, then living through it and growing past it and being able to see it for the weaknesses it has.

Q: You two arrived at Wycliffe as a young married couple, and birthed and raised three children here through to the preteen years. There must be a strong sense in which Wycliffe feels very much like “home” to you both.

Q: Tell me about that.

GT: Even apart from having raised kids at the College, Wycliffe felt like home to me because I didn’t know there were evangelical schools that also respected academic integrity. The only evangelical schools that I was aware had this big doctrinal check list of things you had to believe. So coming to Wycliffe, I realized that this was a place of faith and orthodoxy. But nobody was looking over your shoulder and threatening to kick you out if you happened to think a little bit differently about some minor detail of the Christian faith.

I felt at home pretty much from the beginning. And yes, Wycliffe was an amazing place for us as a family. We both found it very family friendly. When our children were babies Marion would bring a baby monitor into the faculty meeting and nobody minded. And that—we realized from talking to colleagues—was light years ahead of other institutions.

Q: How has God used your professional experiences to deepen your faith?

Q: Looking back, if you had it to do all over again, is there anything you would do differently?

GT: I would. I don’t think I was aggressive enough out of graduate school. I should have signed up and put my name forward for more writing assignments.

But that’s one of the things I look forward to in retirement. I hope to be hyper-focused on some projects that I still want to see come to light. Those are related mostly to the stories of the Patriarchs in Genesis.

Q: What advice would you give to young Christian scholars just embarking on their careers?

GT: If they’re interested in the academic culture of North American universities today they can’t avoid publishing. I’ve really admonished my own graduate students to publish and I’ve tried to make that as unintimidating as possible. I’ve tried to encourage students to publish their essays. Every refereed journal article they have published is like having a strong ally at the table when it comes to hiring.

But not to lose sight of things. There are a lot of people who have worked really hard academically, but they’ve neglected their spouses and their kids, and that can be unhealthy, so there needs to be a balance. And Wycliffe is a place that really has respected and honoured that.

Finally, think globally. There may be few high paying academic jobs in North America, but the church is growing in places like Africa, in Southeast Asia, and even mainland China.