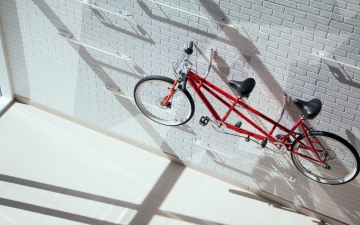 I can recall as a pre-school infant asking my parents about the likelihood of nuclear war, which seemed an ever-present danger in the UK of the early 1970s. This is not to say that I attribute any particular ongoing state of personal anxiety since then to this experience! However, a background climate of fear (nuclear disaster, environmental disaster) can have a paralyzing effect as well as a catalyzing one, as we can see from glimpses of households we know as well as from social media.

In the face of anxiety over the loss of secure income, basic needs (Matthew 6), even the threat to family (Genesis 22), we are assured that “God will provide,” while 1 Corinthians 10:13 reminds us that God will not allow us to be tested beyond what we can bear and that we can cast all our cares on him (1 Peter 5:7). This trust seems to fly in the face of common sense, yet really it is long-term common sense not to panic buy, anxiously hoard, and cravenly over-consume.

An antidote to our deepest fears

As an antidote to our deepest fears the Psalms depict God as a rock, on which all other sources of security rest and must be seen to rest. His care extends well beyond the church (Jonah 4:11) and he makes wars to cease to the ends of the earth (Psalm 46:9). There is a peace that passes beyond all understanding (Philippians 4:6) not a peace as the world gives (John 14:27). One can see Providence as a red thread running through the Bible and in the prayers and liturgies of the churches. It might have needed reconfiguring as a doctrine during the Enlightenment but rather than shrink, it grew. In the apparent tragedies of high Modernity in the 20th-21st centuries belief in God’s providential hand has become a leaner, fitter, more supple faith.

The old textbooks from the Confessional period of a few centuries back speak of a threefold form of God’s providence: preservation, governance, and concurrence. God seems committed to keeping created life in existence, just as the rainbow reminds one of his covenant with Noah “and every living creature” (Genesis 9:8-17), which quite possibly overrides any cycles of destructive judgement forecast in 2 Peter 3:7. Governing direction means that God often steers creation back on track when it has veered off the road, and he acts through his agents, even the most immoral, in order to give (especially his) people a loud and clear message.

Yet he also likes to concur or “run alongside.” Sure, ultimately, governance tells us God is in charge of the steering wheel (accelerator and braking), but “concurrence” means he also seems to delight in involving our natural desires, in as much as they are good, even while blowing through the heat of said desires “coolness and balm.” On such occasions we ride tandem, as children with their father, sometimes pushing, often freewheeling.

This is not about God just adding his blessing to our plans, but he is one who is involved with us as we work out for what/whom/where it is that we are made while reminding us constantly that he is the ultimate good who is closer than a brother (Proverbs 18:24). It is often said that biblical providence is more about providing than seeing ahead, but really in God’s life, the former has to include the latter. God plays a mean game of chess, but he does not play dice.

Mark Elliott is Professorial Fellow at Wycliffe College. His published books include Providence: a Biblical, Historical, and Theological Account and Providence Perceived: Divine Action from a Human Point of View. If you enjoyed this post, you may also appreciate "The nations eye each other up."