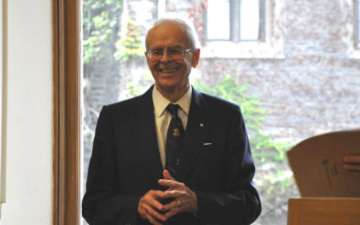 C. Douglas Jay, the founding director of the Toronto School of Theology, died peacefully on January 1st, at the age of 95. When he accepted the challenge to be TST’s first director in 1969, neither he nor anyone else could know whether TST would ever be more than an interesting but passing ecumenical experiment. Probably few would have dared to hope that it would become one of the world’s pre-eminent theological consortia—which it did. That the horse didn’t stumble out of the gate was due in large part to Doug Jay’s leadership. The qualities that made Doug successful as director were his ecumenical values, his commitment to the university context, his ambitious vision for TST, and his style of leadership.

First, as for his ecumenical values, Doug loved the diversity of God’s human creation. He had his own views about things, but he had the kind of intellectual humility that moved him to look for truth in competing views as well. Even before TST existed he was part of an ecumenical team that taught a popular course in Christian ethics, along with Reg Stackhouse of Wycliffe and Jim Farris of Knox. Although these three had different views on some of the issues of the day, such as capital punishment, they modeled the respectful and appreciative dialogue that would be crucial to TST. And, similarly, he rejoiced in the thaw in Roman Catholic relations that followed after Vatican II. Just as Doug could suppose that people are more right in what they affirm than in what they deny, he could understand the seven TST colleges to be more united than divided in their service of Christ and their theological mission.

Second, Doug’s leading idea as director was the importance of a strong, mutually beneficial relationship between TST and the University of Toronto. He recognized that scholarship, research, and teaching were in TST’s DNA and that, in a more complicated and hidden way, theology was in U of T’s DNA as well. Doug devoted years of time and megawatts of personal energy to bringing TST more fully into U of T’s life and culture. (Not everyone shared his enthusiasm.) His work finally paid off. His greatest achievement, almost at the end of his term as director, was TST’s agreement with U of T on a system of conjointly conferred theological degrees.

Third, Doug had a huge vision for buoyant collaboration among the seven TST colleges. Among the achievements that have taken root were an agreement on academic standards, a TST-wide timetable, the Toronto Journal of Theology, and excellent common doctoral programs. Among temporary achievements, the colleges in his period cooperated in field education; faculty members from different colleges taught some introductory courses together and team-taught many advanced courses; and most students took about half their courses in colleges other than their own. But in these areas the colleges pulled away from each other after Doug retired. Doug’s unrealized hopes included a robust ongoing interchange among students and faculty members across TST, a central theological library (as at the Graduate Theological Union in Berkeley), TST-appointed faculty members in areas that all the colleges needed but that none could fund alone, and common faculty complement planning and curriculum planning. Doug’s larger ecumenical vision is by no means entirely dead; it’s just that it sometimes seems to have become more the University’s vision for TST than TST’s vision for itself.

Finally, maybe most importantly, we come to Doug’s style of leadership. The TST consortium is an intrinsically unstable affair, with each member college jealous of its autonomy, suspicious of central authority, reserved about sharing resources, and not naturally inclined (as few of us are) to follow Paul’s counsel to the Philippians to “consider others better than yourselves.” A TST director always faces strong headwinds, therefore, and can go wrong in many ways. Doug, patient and consultative and respectful of different views, was absolutely the right person for the position. I know several faculty members during Doug’s time as TST director—I’m one of them—who took Doug as their model and mentor as they learned the craft of academic administration in a consortium. Doug worked hard to build consensus for every decision, rather than risk division. He proposed great things, but he adapted as necessary, and he “made haste slowly.” He systematically and regularly spent time with TST’s various constituencies, so as to know what was happening and what people were thinking. Above all, he was intentional about developing a sense of community and a spirit of mutual support among the college heads. He saw his role at TST in a realistic perspective, and he had a sense of humour about how modest that role really was. He knew that most of his influence didn’t come from his position, but from earning people’s respect and building “relationship capital.” I also think that Doug learned from our Lord some lessons about being as shrewd as serpents and as innocent as doves, while also trusting in God’s grace and providence.

I won’t speak here of the many other roles that Doug had in the United Church, Emmanuel College, the World Council of Churches, the Association of Theological Schools, and the wider world, or, for that matter, in his family. But since many who read this will never have met Doug, let me say a bit about his person. If you were to conjure up a mental image of a bookish male Protestant clergyperson of the 1970s, maybe slight of build, reserved but friendly, with a quiet, thoughtful, slightly halting, and often amused manner of speaking, you’d pretty much be picturing Doug. In 1982, at the biennial meeting of the Association of Theological Schools in Pittsburgh, there was a free evening in the schedule, and a group of us from Toronto decided to go to a movie. The lady in the ticket booth looked at Doug strangely, and said, “Can I ask you something? I have this strong feeling about you. Are you—a minister?” Doug was dumbfounded at her discernment (me, not so much). But then the movie we chose was “Dead Men Don’t Wear Plaid” with Steve Martin, and I have to say that I was a bit shocked at how boisterously Doug relished the raunchy dialogue.

After I became TST director in 2007, Doug was one of my great supporters, and we had many helpful and encouraging conversations. And, as it happened, he was a member (and minister emeritus) of the congregation where my wife has been the minister for the last little while. (Doug’s father had once been a minister there as well.) I used to enjoy accompanying Morar on her pastoral calls on Doug, first in his apartment, and then in a long-term care facility. Towards the end, his memory was failing and his health was fragile, but I could always tell that the Doug I knew was in there, the gracious and hospitable gentleman who liked engaging diverse people and ideas and cultures, who took great satisfaction from getting things done well, who had many entertaining stories to tell, and whose great joy was to be God’s good and faithful servant.

Alan Hayes is the Bishops Frederick and Heber Wilkinson Professor of Church History. If you enjoyed reading this blog entry, you might also enjoy Professor Hayes' more personal reflection, "How Some Indigenous Students Changed Me."