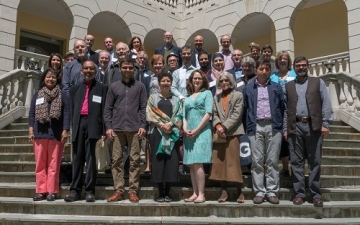 The Building Bridges Seminar is an annual event that brings together prominent Christian and Muslim scholars for intensive discussion and study. It was developed as a direct response to the 9/11 terror attacks on the United States. According to the Berkley Centre, “The annual seminars … have explored a number of the most significant themes in the interface between Islam and Christianity.” Last month, Wycliffe Professor of New Testament, Ann Jervis, travelled to Washington, D.C., to participate. Communications Director Patricia Paddey interviewed Ann about the experience. Read an excerpt of their conversation below.

AJ:          It was certainly an honour. Once there, I realized organizers had looked for scholars, but also for personalities that would be open to interfaith dialogue.

AJ:          The Christian scholars began our days at 7:30 a.m. with the Eucharist. At 9 a.m. there was a plenary in which either a Muslim or Christian scholar introduced the texts we would study for the day. We alternated between study of the Quran and Muslim scholarship, and the Bible and Christian texts. This year’s theme was “Religion and Power.” From 9:30 a.m. until noon, we broke into small groups. In my group, there were three Muslims; two were religion scholars, and one who works at the United Nations fostering understanding among development agencies about the importance of religion. There were also two other Christian scholars in my small group, both Roman Catholics. In the small group we studied each other’s texts, discussing scripture and foundational theological and ethical ideas in each other’s faith. From 2 p.m. to 5 p.m. we met again for more study of texts, then for an hour from 5:30 to 6:30 the entire group of scholars (about 25) met in a plenary to share our insights.

AJ:          It was intense. We followed that schedule for four days, so you got to know people. We were cloistered—always with the same people, eating meals together, working together.  It was very demanding intellectually, and it was emotionally intense. But the atmosphere was remarkably congenial. It was truly very lovely. Everybody there wanted to create trust and be open, to learn from each other. My sense is that all the participants were people of sincere faith, so that also made it very special. We were all people who deeply feel our commitment to God, and yet we were willing to receive questions that some might perceive as offensive.

AJ:          I was struck that this was a little pocket of harmony. Who knows how God can or will use that? And the fact that all of the participants were highly educated also reminded me of the importance of education. Everyone was willing to look at their texts without defensiveness. Conversation flowed. Trust was built.

AJ:          First to realize that this initiative has lasted since 2001. That there are people willing to put resources behind it is wonderfully encouraging. To meet people from the Muslim world who want to learn from Christians. I was also encouraged to learn how grieved the Muslim scholars are at the treatment of people of other faiths in some Muslim majority countries. There were no hidden agendas. There was a recognition that we were all people who are mature in our faith. It was about building relationships of understanding and personal trust—and hoping that the endeavor, which may seem so peripheral to the political scene, might make some difference in our terrorized world by being a pocket of peace. Who knows what affect that will have? But I certainly came away having made new friends. These were not just professional relationships that were built, but personal relationships of friendship and trust between international religious leaders. I can see that being valuable in a situation of crisis.