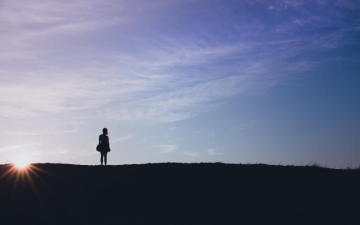 I love the story in the Bible of when Peter decides to get out of the boat and walks to meet Jesus, who had walked out to the middle of a lake.

While we’re not entirely sure what got into Peter in the middle of that stormy night, we know he was desperate to join Jesus on the water.

Have you ever wondered why?

I’d like to think that Peter, after hanging out with Jesus for a year-and-a-half, was responding to a deep yearning that had been quietly growing within him. It was almost like he couldn’t contain his desire any longer. He was desperate to have his relationship with Jesus be as life-altering as the change he had witnessed in so many others who had come to Jesus for help.

Less than 24 hours earlier, Peter had witnessed Jesus caring for, healing, and feeding the large crowds. I wonder whether, as he watched people respond to Jesus, Peter craved a faith that was more robust. Was he feeling desperate for a shake-up? Maybe Peter looked on in envy or even amazement, and knew he wanted more. He wanted something deep within him to be rattled and changed.

Perhaps Peter had been open to—and longing for—a courage that meant something.

In those moments on the water when Jesus said, “Do not fear, take courage. I am here,” Peter surrendered himself, relinquishing his control. He asked Jesus to tell him to get out of the boat and walk toward him. Peter could have stayed safely and reasonably tucked inside the boat, watching the waves crash around him. He could have held onto his bundle of security a little longer and waited for Jesus to calm the storm. But Peter knew he wanted more. He wasn’t forced out of the boat, and didn’t have to walk on water, but Peter created an inciting incident by asking Jesus to call him out onto the waves. His longing for a fuller experience of a faith that truly saves was the catalyst for his full surrender and first step.

What happens next is something Peter could not have predicted. Could he really have known that walking on water would work? When Peter scrambled over the side of the boat, he actually started walking on top of the waves. He didn’t sink but defied all natural laws and made his way toward Jesus.

Imagine the exhilaration and surprise he must have felt.

Moments later, as his focus shifted from confidence to fear, from courage back to caution, Peter began to sink and cried out for Jesus to save him. But in those first moments, Peter had gotten a taste of the freedom he’d been longing for. He had experienced the power of faithful surrender and the promise that Jesus would never let him drown. He had a firsthand visceral experience that Jesus could be trusted whether his faith was strong and bold or frail and failing.

I wonder how formative this event was in shaping Peter for the things he was going to do in the future. He had accepted the dare and embraced the risk. He had tasted what trusting in Jesus could do. Peter would certainly need to surrender his control and sense of security again and again and again—but every time he’d step out of his comfort zone, he could remember that night on the water.

This is an expert from Life’s Great Dare: Risking It All for the Abundant Life by Christa Hesselink. Join Christa in her three sessions at Refresh Conference, May 11-13, as she discusses the worthwhile risk of transformation; how to keep going when you’re burnt out; and the necessary practice of the contemplative way.