What is the Best Bible Translation? | Wycliffe College
Skip to main content

What is the Best Bible Translation? 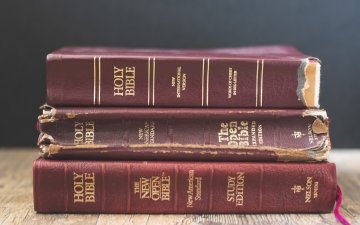 "What is the best Bible translation?"

As a biblical scholar, I am asked this question more than any other.

To start, I have bad news and good news. The bad news is that every translation is an interpretation. There’s no getting around it: almost every clause in the original calls for a decision about translation that affects meaning in some way. The good news is that no intentionally devious translator lies behind any of the commonly known translations. For example, the NRSV fell suspect among some conservative Christians for translating the traditional “a virgin will conceive” of Isaiah 7:14 instead as “a young maiden will conceive.” The original Hebrew word is in fact the latter, whereas “virgin” (which a young maiden can be) reflects more the Greek translation, which influenced the New Testament.  (Some would say the context merits “virgin,” but this takes us on a tangent.)

The best tool for the task

Ask any carpenter “what is the best tool?” and they’ll tell you it all depends on the task. The same is true of Bible translations. One version, such as the NASB (or an Interlinear), is the perfect tool for sermon preparation and serious Bible study because it exposes certain bare-bones, but it reads too awkwardly for the listening ear of a congregation. Conversely, a smooth, easy-to-understand English translation such as the NRSV reads well from the pulpit but smooths over ambiguities that the pastor will want to sort through during sermon- or Bible-study prep. Asking what is the best Bible translation is like asking what suit-tie matches; it all depends on what you are matching it with.

A bit of background on the theory of Bible translation is helpful in deciding which translation is best for your purposes.  Translators generally lean toward one of two approaches: formal equivalence or dynamic equivalence.  Put too simply, the former aspires to literal word-for-word equivalency whereas the latter seeks equivalency of meaning when translating the original—even if it means using none of the words in the original.

Perhaps you are thinking: I want a word-for-word translation because I take the Bible seriously. But it’s not that simple.  Some expressions make no sense when transferred word-for-word from one language into another.  For example, when I was a lad, polite people in my church would often say “horse feathers” instead of what BS stands for (and I don’t mean Bible Study!). But, without knowledge of the background (which we often don’t have in the case of the Bible), to render “horse feathers” by “horse feathers” conveys not a euphemism, but merely something bizarre. Take Job’s wife for example; her words to Job are not “curse God and die,” but rather “bless God and die” which every translator rightly understands to be a euphemism.

Problems like this arise with all sorts of expressions—and even with some words.  For example, there was no word for “sheep” in the languages of the peoples of the Canadian arctic.  Thus, in the Huron Christmas Carol we cannot but sing of “hunters” instead of “shepherds” and of “rabbit skins and beaver pelts” instead of “gold, frankincense and myrrh.”

A problem with a smooth translation with consistently clear meanings throughout is that the translation committee, from among various interpretive options available to it, has decided for the reader what the text means, leaving no trace of the ambiguity it has left behind.  Where the translators are right, they have helped; but where they are wrong, their translations are nothing short of misleading.  (Neither are word-for-word type translations exempt from the possibility error, as our example of “horse feathers” makes clear.)

In his book Greek for the Rest of Us, William Mounce offers the following chart, which locates various English versions of the Bible on a scale between the extremes of woodenly literal and outright paraphrases.

Which translation is best for public reading from the pulpit?  The TNIV or NRSV are good mid-range translations with the added benefit of being gender-inclusive. Which for young children, or an ESL group?  The International Children’s version (ICV) and the Good News Bible (GNT) respectively, both of which use very basic vocabulary.  As with good translation itself, context is everything.

Finally, let me recommend a few less well-known translations. The Jewish Publication Society Version (JPSV) of the OT, though often different from versions more familiar to us, falls mid-scale on the range and is known for accuracy and freshness.  The Revised English Bible (REB) is also good and, being close to the RSV on the scale (though not shown).  My favourite NT by far is Interlinear for the Rest of Us, by William Mounce; it is as close to the Greek as the non-specialist can get.  But to fully benefit from it takes practice and it requires some knowledge of the grammatical categories to which it refers in detail.  It also includes a dictionary to which the non-specialist can turn, despite not knowing Greek, by recourse to an updated version of the numbers of Strong, whose dictionary pales by comparison.

Glen Taylor is Professor of Scripture and Global Christianity at Wycliffe College. If you enjoyed this blog post, you might also appreciate his: Nine Steps from Biblical Text to Biblical Sermon.