When it comes to the church, how beautiful is small? Part 1 | Wycliffe College
Skip to main content

When it comes to the church, how beautiful is small? Part 1 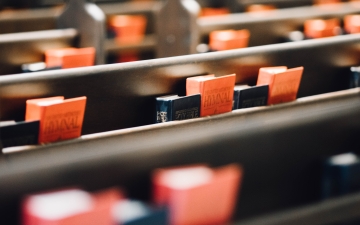 Just when we thought that we were about to survive the coronapocalypse, the Omicron variant appeared from the viral swamp and, like the tail of the Balrog, swept us from the victory podium. So, for the next few months we renew our efforts to comply with mutating guidelines and policies, weary though we be, in the hope that if we all contract the disease, we shall not all do so at the same time. And we pray that this virus will soon spend itself and join the ranks of endemic afflictions.

But while we remain preoccupied with survival, there is much talk about what life will be like when we emerge from the pandemic, and what will be required to restore the synapses of our communal life after having worked and worshiped for so long in our scheduled, two-dimensional digital encounters.

Some have noted how the experience of the last two years has changed us for the good. In the last week of term in December, in an inspired and moving moment at the beginning of chapel, Professor Ephraim Radner said that the conditions under which we have been living have taught us to hope more fully, pray more deeply, and share God’s love more generously.

Similar changes have been detected across the Church. The Anglican Church of Canada’s statistics and research officer, Canon Neil Elliot, drawing conclusions from a survey earlier in 2021, says that we “trust God more” and that “we are praying more.” He also notes that the church’s online presence has become “really good, really quickly.” For bloggers with The Gospel Coalition, the challenges of COVID have made us think more deeply about what it means to be family, to be better friends, and to be more committed disciples. As Ed Stetzer has recently reminded us, along with the challenges come great opportunities for ministry. And while we may doubt our own capacity to meet these challenges, they are no match for the power of the gospel or the majestic rule of God.

Church on a Diet

While it is impossible to predict just what the Church will look like, even before the end of 2022, one thing the pundits seem to be agreed on, however, is that small is in our future.

Indeed, many would say that small is in our present. Last month, the Pew Research Centre published a report that in America the number of those who identified themselves as Christians dropped 12 percent in the last decade, while the number of those who say that they have no religion has grown by 10 percent over the same space of time. Moreover, the decline would appear to be shared in equal proportion between Protestants who identify themselves as mainline or evangelical. Prognosticators believe that the pandemic is hastening the falling away.

There are, of course, a great many factors to take into account in the story of the church’s decline. Many point out that we have moved into a post-Christendom era. In my parents’ generation, it was expected that most families attended a local church, and the church was not in competition with the culture. There was no shopping or hockey practice on Sunday in “the day.” But then came TV, the media theorists remind us, and Sunday Evensong lost out to Ed Sullivan.

But there has also been significant change among us baby boomers with respect to our attitudes towards church. And here I speak as a bishop. There was a time when churches were stable enough to accommodate mediocre leadership. If there was an unpopular pastor in a parish, the congregation would either mobilize to get rid of him or her, or they would patiently wait out the season of discontent. It soon became clear to me, however, that even my healthiest churches could not survive a weak incumbency. Defections to other denominations or retreat into some kind of private religion meant that strong churches could be only one bad leader away from closure. I sometimes think that, in this respect, our Protestant heritage has betrayed us. It has made us less patient and less tolerant. So if we don't like it, we leave.

As an aside, one might think that the Church is simply a victim of irresistible cultural forces. If that were the case, we ought to convert all our seminaries into departments of sociology.

But it is here that theological formation, such as is offered at Wycliffe, deserves greater investment. In 2016, Maclean’s magazine cited a paper comparing the traits of growing and declining mainline protestant church attendees and clergy. It was the research of a professorial team from Wilfrid Laurier University and Redeemer University College. The paper was titled, “Theology Matters,” and the researchers reported that the features they found to be most associated with growing churches were, in order of importance: how churches used contemporary worship; their emphasis on youth programs; the theological conservatism of the clergy; and the theological conservatism of the parishioners. By “conservative” they meant views that are typically held by conservative Protestants, such as a high regard for the authority of the Bible, a literal belief in the deity and resurrection of Christ, and a belief that Christianity is true to the exclusion of other religions.

While former Wycliffe Principal, Reginald Stackhouse, used to say that the only statistically significant growth in the Anglican Church has come about as the result of immigration, and sociologist Reginald Bibby reminds us that much of what passes for “growth” is really just transferred denominational loyalty, it remains the case that those communities that are devoted to reading Scriptures as the word of God and to prayer as a means of deeper discipleship are “more likely to agree that their congregation has a clear mission and purpose, and identify evangelism as that purpose” (“Theology Matters” paper).

How Beautiful Is Small?

This brings us, then, to responses to the Church’s decline. A few years ago I read about the closure of a church in Hamilton. There, a former classmate of mine surveyed the situation in the neighbourhood. He observed that the days of the local grocery store, gas station, and bank were over. Now he said that, with only twelve remaining members, it is the church’s turn. “Our work here is finished,” he said. “It was well done, this is not a failure.”

And yet, the feelings of failure are hard to shake. Shortly before leaving my episcopal office, we held a round of regional town hall meetings in order to discuss the problem of having more church property than we could support. They were hard conversations. We all love our churches, and many of them hold strong family connections. I remember asking a small group of parish leaders about this over lunch. “So, what does the church need to be for your children? What legacy to you want to leave?,” I inquired. There was silence around the table before one woman said, wistfully, “My children don’t go to church.” There were nods of understanding and sympathy when another added that she felt like she had failed her kids. This is part of what makes the thought of the church’s demise and its consequences so very painful to contemplate. It is not just that the church may not be there for us, but that those who come after us won’t miss it.

“Shed your baggage, move more nimbly and sharpen your sense of mission,” is the advice we hear from some quarters. “We no longer live in Christendom. We really have to accept that it’s a thing of the past,” says an Episcopal minister in Maryland.

Small is indeed in our future. But, to borrow a phrase from the late economist, E.F. Schumacher, small can also be beautiful. A professor from the United Church college in Cambridge, England, John Bradbury, put it this way:

We talk about the terrible nature of church decline [. . .] as though that were [bad]. Are we sure that we’re not hankering after political power and influence? Are we perhaps wanting our own return to a nicely Protestant Christendom? Is it possible that the Church is actually meant to be small? Maybe we need to turn to Kingdom images of yeast, or mustard seeds.

Pamela Dolan, a member of the Episcopal Church of the Good Shepherd in St Louis, Missouri, agrees:

I’m a big believer in thinking small. Jesus said that faith the size of a tiny mustard seed could move mountains. Small congregations taking small steps to reach out to the world and engage with their neighbors and communities—that’s a beautiful thing, and a recipe for vitality. It also appears to be sustainable in times of turmoil and restructuring, although I suppose only time will tell that for sure.

Maybe we are facing a new and different kind of epoch in the church’s history, where Christianity will again be characterized more by the mustard seed, where it will exist in small, seemingly insignificant groups that nonetheless live an intense struggle against evil and bring good into the world—that let God in.

Read "When it comes to the church, how beautiful is small? Part 2 >>

Bishop Stephen Andrews is the Principal of Wycliffe College.