When it comes to the church, how beautiful is small? Part 2 | Wycliffe College
Skip to main content

When it comes to the church, how beautiful is small? Part 2 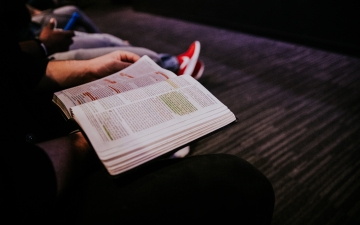 My dad was a “there-are-no-strangers-but-only-friends-I-haven’t-met-yet” kind of guy. He was disarmingly affable and could size up a situation that was full of flaws and point out what was good about it. If my dad’s church was troubled by waning numbers, I expect he would have gone about making more friends out of strangers.

Happily, there are lots of folks in the church that are like my dad. Not easily given to discouragement, they see the opportunities in every challenge, and they believe the best in others. They might even be inclined to rebrand what some regard as failure into a sign of success. Elderly? Just look at all of that experience! Few in number? Just look how close they are! The more spiritually-minded ones will add, “Jesus only needed twelve to change the world. And don’t forget about the mustard seed!”

Ah, yes. The mustard seed. This was the image invoked in the final part of my reflection last week. Jesus does liken the kingdom to a mustard seed in the accounts of the first three Gospels. Should his teaching make us more accepting of our smallness, or even inspire us to make a virtue out of it? (Take that, megachurch!)

Given the Church’s foreseeable trajectory in the west, many do find comfort in the notion that small is actually great. And the benefits of smallness should be noted. Small can be nimble, adapting rapidly to changing circumstances. Small can be friendly and intergenerational. Small can offer opportunities for rewarding ministry. Small can mean deeper, more intimate fellowship. Small can be beautiful, both in the eyes of God and to an isolating and impersonal world.

The Parable of the Mustard Seed

And yet, this is not what Jesus’ Parable of the Mustard Seed is actually about. We may think it is about smallness, for Jesus says that the mustard seed is “the smallest of all the seeds on earth” (Mark 4.31). And yet, he was not giving his hearers a lesson in botany. The ancients knew that there were, in fact, smaller seeds in the world. Jesus the botanist might have said that the smallest seed belongs to the orchid, and if he had said this, we might well have agreed that “small is beautiful” because of the exotic flower the orchid seed produces. But it is Jesus the storyteller who is speaking, and the story is not about small, but about contrast: “Yet when the mustard seed is sown”, he explains, “it grows up and becomes the greatest of all shrubs, and puts forth large branches, so that the birds of the air can make nests in its shade” (Mark 4.32).

The Parable of the Mustard Seed is thus about potential. Orchids are beautiful. But God is not growing orchids. God is growing shrubbery. From tiny seeds he is making large mustard bushes with branches strong and broad enough to offer shelter to birds.

And it is here that we find an ironic beauty in the parable. For the image of birds nesting in a tree planted by God is drawn from the prophetic tradition of the Old Testament. There Ezekiel looks forward to a day when God will sow a noble cedar, under which “birds of every kind will roost, perching in the shelter of its boughs” (17.23). The prophetic vision is of a recalcitrant Jewish nation, seemingly destined for oblivion, but finding its salvation in God’s arboreal enterprise and becoming a refuge and a home for many. This, implies Jesus, is the destiny of the lowly mustard seed. The mystery of the kingdom is that in this unlikely and uncomely shrub God will gather the great nations in safety.

So you see, it is not smallness that is valued in the kingdom. What is valued is the power of God to use what is small to achieve God’s redeeming purposes. Small is great because, in God’s hand, small becomes “the foundation of a work that will encompass the whole world” (Adolf Schlatter).

This is why in the church we do not despise small things or disparage the insignificant. We dare not underestimate what appears modest. Jesus and his ragged band of confused and bumbling followers may look unimpressive. But God does something powerful in and through them. It is God’s nature to glory in the obscure and weak. This, after all, is the way of the incarnation, when God appeared as one small cell in the womb of a teenage peasant girl in a forgotten province of Galilee.

Jesus teaches that God’s work in the world is accomplished largely through little things: a little salt here, a little candle there, and a bit of yeast. But these little things perform some essential service for bigger things. If we feel compelled to praise the small church, let us ask what greater things God is achieving through it. Is there evidence of growth? Are the lost discovering a home? Are the vulnerable finding asylum? Is it an engine for goodness in the world that is all out of proportion to its natural abilities? Small is beautiful where God’s dynamic power is at work.

But there is one more thing that must be said. The Parable of the Mustard Seed, after all, is about a seed. And a seed, if it is to grow, must be buried. As much as the kingdom is about growth and beauty, it is also about sacrifice. If we should embrace our diminutive calling and are prepared to find our future in a mustard seed, it means that we must be willing to give up what is precious to us. Those who say with optimism, “Look at what Jesus accomplished with just twelve apostles!” must consider that, for nearly all of the disciples, following Jesus led to a martyr’s death. Indeed, the soil of the world is made fertile by the blood of Christ himself.

The story of the church is very much a narrative of small groups heeding the call of Jesus to take up a cross and follow him. In the early 18th century, Count Nikolaus von Zinzendorf formed a Moravian religious order called the “Order of the Mustard Seed.” Its members pledged themselves to be true to Christ, kind to people, and to take the gospel to the nations. They wore gold rings with the words “None of us lives for himself,” and, at great personal cost, they established small communities in the West Indies, Greenland, Africa, and the Labrador coast, many of those communities continuing to this day.

A more recent account comes from Orissa, the state in east India where there is ongoing violence against the church. A Christian from those parts tells how, when he was eight years old, his evangelist father was killed by hired assassins. At the time of his father’s death, he said, there were only twelve churches in the region; but within a few years there were one hundred and fifty.

Now, such examples cause us to ponder to what extent the contemporary demise of the church is attributable to the fact that we have been very poor at living out our baptismal promises. There we said “yes” to proclaiming by word and example the good news of Christ, “yes” to the pursuit of justice, peace, and dignity in his name, “yes” to repentance from self-centredness. The way of sacrifice is the way of Christ and the path of the mustard seed.

So let us dispense with any feelings of comfort and complacency we may associate with the notion that the church’s smallness is somehow ennobled by the image of the mustard seed. Let us, rather, heed the beautiful and wholesome exhortation of Peter Chrysologus, the 5th century Bishop of Ravenna:

It is up to us to sow this mustard seed in our minds and let it grow within us into a great tree of understanding reaching up to heaven and elevating all our faculties; then it will spread out branches of knowledge, the pungent savour of its fruit will make our mouths burn, its fiery kernel will kindle a blaze within us inflaming our hearts [. . .]. Yes, it is true: a mustard seed is indeed an image of the kingdom of God. Christ is the kingdom of heaven. Sown like a mustard seed in the garden of the Virgin’s womb, he grew up into the tree of the cross whose branches stretched across the world. Crushed in the mortar of the passion, its fruit has produced seasoning enough for the flavouring and preservation of every living creature with which it comes in contact. [. . .] And now, the church is a garden extending over the whole world, tilled by the plough of the gospel, fenced in by stakes of doctrine and discipline, cleared of every harmful weed by the labour of the apostles, fragrant and lovely with perennial flowers. [. . .]

Such then is the mustard seed which Christ sowed in his garden. When he promised a kingdom to the patriarchs, the seed took root in them; with the prophets it sprang up; with the apostles it grew tall; in the church it became a great tree putting forth innumerable branches laden with gifts. And now you too must take the wings of the psalmist’s dove, gleaming gold in the rays of divine sunlight, and fly to rest forever among those sturdy, fruitful branches. No snares are set to trap you there; fly off, then, with confidence and dwell securely in its shelter.

Read "When it comes to the church, how beautiful is small? Part 1 >>

Bishop Stephen Andrews is the Principal of Wycliffe College.