God’s Call for your life? 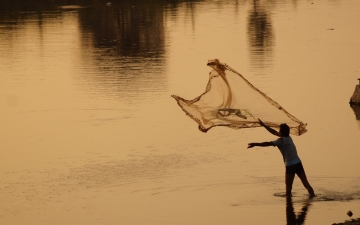 “What is God’s call for my life?” That is a question most Christians think about at one time or another and it is certainly one of the questions we have in the back of our minds when we come to a college or seminary like Wycliffe—regardless of whether we are looking towards possible ordination/paid ministry or envisioning some type of volunteer ministry or service.

It is, potentially, a dangerous question not only because we might be “called” to serve in a way we never imagined but also because the whole way of understanding God’s call in our lives is so easily distorted (the recent Christianity Today podcast series, “The Rise and Fall of Mars Hill” is a powerful reminder of how men and women can distort the notion of God’s call).

Where better to begin to explore this question than by looking to one of the great “call” passages in the New Testament—Luke 5, which also happens to be one of the greatest fishing stories of all time.

Professional fishermen have been fishing all night without catching a thing. As they are washing their nets to put them away, Jesus comes along and commandeers their boat so that he can teach the crowds that are pressing in on him. If you were wondering why they allowed Jesus to commandeer the boat—and you should—we need to note that this is not the first interaction that Peter and his friends have had with Jesus. The passage begins with the word “once” or “on one occasion.” It is does not say “the next thing” that happened, suggesting that we shouldn’t read the first few chapters of Luke as though these events happened one right after another. There was a lot that happened in between each story/encounter that is not recorded even if these stories are in chronological order.

When Jesus is done teaching, he tells the fisherman to go out into deep water and try again. Now, Peter is a fisherman, he knows it isn’t going to work, but as a mark of his growing respect for Jesus he does what Jesus asks: And they caught so many fish their nets were breaking. It would be pretty hard to top that fishing story. Which makes the next part of the story very strange: They left everything (in Mark’s version—“immediately”) and followed him. They have this extraordinary catch, the catch of a lifetime—and we never hear what happened to the catch. Did they leave them to rot on the beach? Did they put them back in the water? Did they take the fish to market before following Jesus? Clearly the point is not the fish.

Instead, the story shifts as Peter falls at Jesus’ knees and says “go away from me, Lord, for I am a sinful man.” If only for a moment, Peter has seen the glory of God in Jesus Christ and, to an extent, he has heard Jesus’ voice as the voice of the creator whose creation obeys him. Here the story has some similarity to the famous Old Testament call passage in Isaiah 6. Isaiah has an extraordinary vision of the glory of God and like Peter he responds: Woe is me! I am lost, for I am a man of unclean lips and I live among a people of unclean lips; yet my eyes have seen the King, the Lord of hosts! It is of note that in neither Peter’s nor Isaiah’s gifts and talents are mentioned. In fact, they are both overwhelmed by the vision of the glory of God and their own unworthiness. In the history of God’s choosing or calling people we see repeatedly that he doesn’t choose the best and the brightest but more often the least and the lost. (1 Corinthians 1:26-27)

Peter and his friends knew Jesus, they had listened to his teaching, they had seen him in action, they had seen his impact on people and they respected his leadership and authority. And now they have seen him do something that is extraordinary.

They begin to understand that this amazing catch of fish shows them something of God in Jesus Christ.  And God’s presence, his glory revealed, calls their lives, their pursuits, their values into question. When Jesus says “instead of catching fish you will be catching people” he is inviting these fishermen into a life ordered around God and his purposes rather than a life ordered around themselves and their values. This is much more than a change in career.

A note of caution

We need a note of caution at this point before we rush ahead and quit our jobs. We often get a little confused in reading stories like this one—some people suggest that this story tells us that a really faithful Christian will go into full-time ministry just like Peter and his friends. But that is not the point of the story. At issue is that there are two ways of living in the world. We can live in response to God and who God is or we can live according to ourselves and what we think is best. And that is true no matter what we are doing for a living. A small business owner may be far more faithful to God than a person who is in full-time ministry. What matters is that we are learning to live in response to God and his call wherever he has placed us. When Peter and Isaiah saw themselves as sinful men it means that they recognised that they were living according to themselves and what they thought best rather than living in response to God. And in both cases, they changed the way they were living in obedient response to God and what he had shown them of himself.

The idea of God’s calling for our lives can be dangerous (and misleading) because it may put the focus on us rather than on God. Certainly, the attention of these stories isn’t on Peter or Isaiah but on God and what God is doing. In one sense we might say that God’s call is always focused more on what God is doing (his mission in the world) than it is on the individuals whom he calls or chooses.  Not to suggest that we are simply tools in the hand of God, but that God’s calling of individuals is always located in working out his wider purposes in the world. In anticipating God’s call on our lives we probably shouldn’t expect that God will gently sit down beside us or tap us on the shoulder and say—I have been watching you and I have something I need you to do or even “I have a wonderful plan for your life.”

I will never forget attending a graduation ceremony at Regent College where Professor James Houston, with a gentle smile on his face, reminded the graduates that ministry is always a gift from God. He said something like: “now that you are graduating, some of you might be wondering what your ministry is going to look like. But you have not earned a ministry, nor will you have a ministry unless God gives you something to do.”

When we read the early church writers, they often interpreted the fishing story from Luke not so much as Jesus calling Peter (and his coworkers) as Jesus calling his church. Bede for example, says “the ship of Simon is the primitive church.” He goes on to speak of the mission God shares with his Church when he says that “the filling of these ships goes on until the end of the world.” Any sense of our own calling is always located in the wider sense of God’s purposes and plans for our world. We are called to align with what God is doing rather than being called to create or make something on our own. The faith and order paper, Baptism, Eucharist and Ministry, affirms that while ordination is a setting apart of a leader it is not therefore the possession of the ordained person.[1]  And when 1 Corinthians 12 speaks of gifts of the Spirit it is clear that these gifts are given for the sake of the body, the church, rather than to an individual.

So does God have a call for my life and yours? Absolutely, and day by day I am still learning to work that out by prayer, engaging with scripture, paying attention to wise mentors, and trusting God. But most of all I am learning that God’s call is ultimately about knowing, loving and obeying God in every area of my life. And in that there is great freedom.

Peter Robinson is Academic Dean & Professor of Proclamation, Worship and Ministry at Wycliffe College. If you enjoyed this blog post, you may also appreciate “Some Rules on Developing Leaders In and For the Church” and “The Call to Ministry: Some Eighteenth Century Advice” and “Story of a Calling: on Being Called to Theological Study.”