Good news for A-Types and B-Types 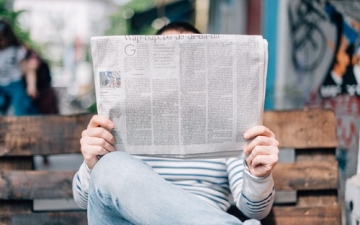 Chapel season at Wycliffe College is in full swing. This fall, faculty are preaching a sermon series around the theme of "The visible shape of Christ's life in us." Recently, Wycliffe's Principal, Stephen Andrews, preached a sermon in which he offered both hope and cautions for the "proud but insecure" A-Type personalities among us. That sermon is excerpted below.

Listen to the original recording:

I remember once hearing someone described as being “a Type A personality.” A "Type A" is somebody who needs to be in control all the time. Meticulous and exact, Type A’s demand perfection of themselves and others. These individuals are intense and can be anxious, motivated by fear, and given to worry. In the train of life, they are up front in the engine, monitoring the progress of the train.

By contrast, those who have a "Type B" personality are folks who take things as they come and never get too excited. Easy-going with, perhaps, a tendency to laziness, Type B’s will be found in the observation car, with their feet on the table enjoying the ride, oftentimes to the annoyance of their Type A fellow travellers!

I can’t vouch for the integrity of this kind of psychological analysis. (The theory was developed by two cardiologists, Meyer Friedman and Ray Rosenman, in the 1950s.) Nevertheless, it serves as a rough-and-ready description of common patterns of human behaviour, patterns that are also evident in the ways many people approach religion.

Type A’s and B’s in the Galatian Church

The caricature can be helpful in understanding what lies behind St. Paul’s teaching in Galatians 5:1-15. Paul might be thought of as talking about two types of people in the Galatian Church: Type A’s and Type B’s.

We might say it was the Type A’s who were attracting Paul’s consternation. You see, in the church in Galatia, there was a group of people who had a strong Jewish identity, and they saw Christian discipleship in very Jewish terms. This shouldn’t surprise us. The first Christians were all Jews, beginning with Jesus and including the Apostle Paul. The Scripture they studied was the same Scripture studied in the synagogue, for the New Testament had not yet been written. If the early Christians in Galatia had an identity crisis, it was in the extent to which they should consider themselves truly Jewish.

One of the hallmarks of Judaism is that it is a religion based on observing the Law of Moses. In addition to the Ten Commandments, there are dozens of rules and regulations that good Jews were expected to follow in order to keep their relationship with God intact. So the question was, should Christians be expected to follow these laws? The Type A’s said “yes.” They believed that such ordinances were all part of what the righteous and holy life of God demanded.

Type A’s and B’s in the Church today

I imagine that the attitude I am describing seems familiar, for just as there were Type A’s in Judaism, there are A’s in every church (and they often make their way to positions of leadership). The issues that exercise them are no longer regulations concerning circumcision, or what to eat, but have more to do with things like church attendance, or performing acts of generosity, or having personal habits of prayerful devotion.

Well, it caused a scandal in Galatia and is for some just as scandalous today, but St Paul says that this understanding of Christianity is a pile of crock. The Type A’s, he maintains, actually do the Church more harm than good. Their rigidity leads to egotism, competition and envy. Moreover, anybody who uses standards of behaviour as a test of whether they or somebody else is a true Christian will ultimately find themselves on the outside of the Church (Galatians 4:30). For they will discover that their code of behaviour and their standards of religiosity will be used to assess their own worthiness and that they will be found wanting.

This is a truth we proud but insecure A’s find hard to accept. But not so B’s. The B’s in Paul’s description are those who do not feel compelled to be “religious” in order to be Christian. We might fairly describe Paul as one of these. Although he lived a devout Christian life, he taught that salvation was possible without scrupulous attention to diet, holy festivals, or bodily mutilation. He refused to adopt a lifestyle which was pinched and restricted by the expectations of legalistic A’s. He was, by his own description, a “liberated” Christian, and so he emboldens his hearers with an emancipating declaration: “It is for freedom that Christ set us free. Stand firm, therefore, and refuse to submit again to the yoke of slavery” (5.1).

The authentic Christian life begins in a posture of passivity. We need to surrender any notion that we must work for God’s gifts; we can only receive them with empty hands. For God’s good gifts are precisely that – gifts. They are not compensation or wages. God’s goodness is free to those who embrace it by faith.

Christianity is good news for Type A’s and B’s alike, for it is a religion of grace. We must learn that there is nothing we can do which would deserve God's favour. God’s grace and the freedom it brings arises out of his free and unconditional love.