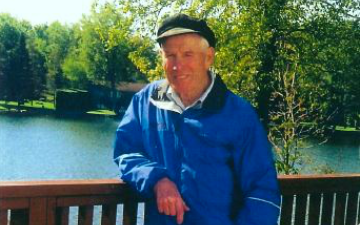 By The Rev. Earl Gerber

The Rev. Earl Gerber (Wycliffe '53) shares with us his joy and sorrow, and God's abiding grace since graduating from Wycliffe College.

It was sixty-five years ago next month that I graduated from Wycliffe (April 30, 1953.) The College will always have a special spot in my memory and affection. Although officially "retired" in June 1994 I am still active in St. Andrew here in Alliston. I preach once a month, and lead an adult Bible class once a week, with fifteen members who are hardworking, faithful, and incredibly loyal. It is very humbling.

As a Wycliffe student, I spent the summer of 1950 in a three-point rural parish in south Simcoe. The following summer I was in charge of a two-point maritime parish in Nova Scotia.

Following graduation and ordination to the diaconate, my wife and I spent a year in Kamloops B.C. in the (then) Diocese of Cariboo. We are still in contact with a few of the people we met there, then. For the next six years, we ministered to the Inuit of Arctic Quebec (Nunavik) on the east coast of Hudson Bay, during which time three of our four children were born. Our third son was born in the Nursing Station at Inukjuak in Feb. 1958. The Mountie's wife delivered him.

Following our return South, we served in Muskoka (twelve years), Richmond Hill (eleven years), and Mississauga (ten years), all in the Diocese of Toronto. Since retiring, I have done three interims.

After we had left the Arctic, I did not lose touch with the Eskimo people, nor did I lose the ability to speak Inuktitut. Over a ten year period, I was part of a team (twelve members) of Eskimo-speaking Anglican clergy ministering to natives from Baffinland and Nunavik who had been evacuated to Montreal for specialized surgical and medical treatment in the many hospitals and clinics there. We were quartered with them in mid-town Montreal in a facility known as "Baffin House", as they awaited admission for treatment or transportation back to their northern homes. Most of them were homesick, some of them were fearful (with good cause), some of them were bewildered, and all of them were most grateful for our ministrations.

Finally, a couple of years ago, I relinquished a ministry to Eskimo men in a Medium Security facility of Corrections Canada, located just east of the Muskoka Airport and north of Gravenhurst. Bi-monthly, I would celebrate Communion in the chapel there, for the fourteen-sixteen Anglican men (plus one or two others). All this was done in company with a lady Deacon, and with the written permission of the Bishop of Algoma (the present Principal of Wycliffe).

With infinite sadness and sharp grief, I parted company with my beloved wife Betsie (victim of viral pneumonia) a little over two years ago. We had ministered together for nearly sixty-three years.

Through all this, my debt to Wycliffe remains beyond calculation, and my gratitude to our Risen Lord, for his abounding grace, without which none of the above could have happened.