Theological Interpretation of Scripture: “not a method but a mode” | Wycliffe College
Skip to main content

Theological Interpretation of Scripture: “not a method but a mode” 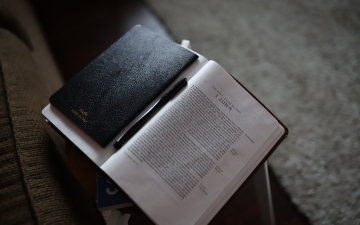 “The soul watered by sacred Scripture grows fat and bears fruit in due season, which is the orthodox faith, and so is it adorned with its evergreen leaves, with actions pleasing to God, I mean.” – John of Damascus (The Orthodox Faith, 4:17) as quoted in Psalms 1–50 by C.A. Blaising and C. S. Hardin.

During much of the modern era, there has been a proliferation of techniques and approaches to reading the biblical text. Many of these approaches have enabled us to look more closely and carefully at Scripture. We’ve learned to ask all kinds of questions about the text and its setting. The information gained as to origins, context, and content is vast and complex. And yet, all too often, we seem to have lost a sense of how to read Scripture with imagination, devotion, and delight.

In the academy for a time people assumed that the best observer of Scripture was detached and neutral, a person who was able to put aside the lenses they brought to the text, including faith, in order to conduct a careful and thorough examination without bias or prejudice. That assumption has been unmasked as simplistic, but there remains a tendency to examine the text from above. It’s as though the careful student of the Bible is one who sees the biblical text laid out like a cadaver on an examination table, to thoroughly pull, prod, and dissect it. Careful scientific methods and techniques can tell us all kinds of things about the life lived; bones once broken, diseases survived, perhaps even the wear and tear of overuse. Yet, in spite of all the information gleaned there isn’t a basis for knowing the cadaver as a living being. There is no personal encounter. Any conclusions arrived at wouldn’t wholly align with the understandings of those who knew and loved the person in question.

Today there is widespread recognition of the impossibility of a neutral, objective approach to the reading of Scripture. One result of this has been a proliferation of different interpretive approaches: a feminist reading, a liberation reading, a post-colonist reading. Acknowledging that everyone brings to the text their own particular assumptions, their own particular theological frameworks (which inevitably shape the way in which they read the text), these “advocacy” approaches assume that all such approaches are legitimate in their own right. The result is a cacophony of voices. It’s not surprising then, that the first question often directed towards theological interpretation of the text is whose theology, which model or which approach is being assumed? But justifying a particular tradition or even a denominational approach to interpretation is not what drives the Theological Interpretation of Scripture (TIS).

Not a method, but a mode

The first commitment is a theological assumption about God: that the One revealed through the text, who uses the text in revealing himself to us, is the Trinitarian God—Father, Son, and Spirit. “Those who approach the Bible as Scripture must not abstract it from the Father who ultimately authors it, the Son to whom it witnesses, and the Spirit who inspired and illumines it,” writes Kevin Vanhoozer. This is not simply a reaction against the modern tendency to begin from a position of philosophical naturalism. It is rather, a claim about the biblical text in light of the way this God engages with us in and through it. And it centres around the confidence that God in Jesus Christ continues to engage with us through the Holy Spirit in and through the text. This first assumption is then bolstered by other assumptions that align with it.

The second assumption concerns the unitive nature of the text. As Richard Bauckham observes in his essay, "Reading Scripture as a Coherent Story," the coherence of the text is not grounded in how it agrees with itself throughout, or even the integrity of principles or concepts put forward in the text, but is instead grounded in recognizing the text as a coherent narrative whose backbone is the story of God’s intentional engagement with human beings and his creation culminating in the person and work of Jesus Christ.

That brings us to the third assumption, which is that in reading and engaging with the text we must do so in, for, and with the Church—including the chorus of witnesses who go before us. The retrieval of the work of the earliest interpreters of the text is vital to this endeavour for several reasons not the least of which is the variety of ways in which they approached the text (figural, tropological, allegorical, and literal). As such, they give a breadth and depth to the reading of the text that challenges our own narrow reading.

The earliest interpreters were struggling to make sense out of reading the text because they were seeking to make sense out of who this God is who has revealed himself to us in Jesus Christ. As the scholar Tad Guzie puts it, “scientific exegesis begins with a text which speaks of mystery: patristic spiritual exegesis begins with the mystery spoken of in the text.” As such, the early interpreters’ basic posture in relationship to the text was one of reverent attention to the God who has and does make himself present to us in the text to foster our knowing of him.

TIS has at times been criticized for seeking a return to a pre-critical reading of the text. Listening to the voices of the saints—and especially the patristic writers—is central to TIS. Yet, there is not a naïve assumption that we can or should somehow bypass recent scholarship in a return to ancient interpretations. Instead, the fundamental assumption is that the text must be read in the context of the Church, the communion of saints, both past and present. Neither is there a retreat from contemporary cultural issues as though a reader might isolate themselves from current matters or concerns. Rather, there is a rejection of the distance that a solely historical reading of the text places between it and our current situation, a distance that reflects a lack of understanding of the God who speaks to us (present tense) in and through the text. As such, our primary concern is not to make the text relevant or to try to bridge the gap between then and now, or to endeavor to apply the text to our current situation, but to listen to the voice of the Spirit who opens our hearts and minds to turn and listen to the God who continues to speak in a coherent and consistent manner into our lives and world through Scripture.

At Wycliffe College, we give priority to the theological interpretation of Scripture in our worship, in our teaching, and in our scholarship. Peter Robinson is Academic Dean and Professor of Proclamation, Worship and Ministry. During the Winter 2020 semester, he will be teaching a course called "The Church, The Faith and Our World," exploring leadership and ministry in the context of a theological understanding of the nature of the Church and the scope of its ministry.